The new kids on the Campbeltown block 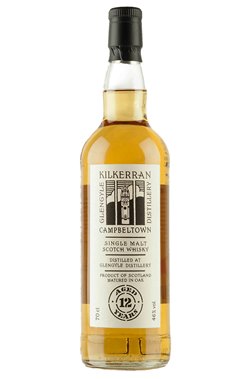 Glengyle distillery has had a potted history and, was closed for 75 years until 2000. During the closure, the site had been used as the Campbeltown Miniature Rifle Club and as a sales depot for an agricultural company. Following purchase by J&A Mitchell (owners of Springbank) distilliation is once again back on the menu, and spirits have been flowing through the Glengyle stills since 2004.

Glengyle's whisky is not called Glengyle though - the simple reason is that there is already a blended highland whisky with that name. So, instead, the name Kilkerran was chosen, deriving from 'Cille Chiarain' the original Gaelic name for Campbeltown.

The first release from the distillery was in 2009 - Kilkerran 'Work in Progress 1' - a further 7 Work in Progress releases followed, matured in either bourbon of sherry casks (or sometimes one of each type). These demonstrated the quality of the Glengyle spirit as it aged and allowed the whisky world an early chance to experience Kilkerran before the first official release. Seven years later this first release arrived with the advent of Kilkerran 12 year old in 2016 - the distillery's first core product. The bottle is a combination of 70% bourbon casks and 30% sherry casks. Expectations were sky high.

Nose: Smoke is apparent immediately and it’s fairly indicative of what you’d expect from a Campbeltown malt – it’s greasy and sooty but, arguably at the lighter end. In terms of fruits we’re favouring a fresh and biting citrus long with gooseberries. The additional of water brings these out further. There’s a background vegetal note which I can only describe as ‘mossy’. Oak and high maltiness ground the nose together with an expected maritime ‘sea breeze’ in amongst the light but pungent peat.

Taste: The greasiness comes through with a very oily and full mouthfeel. It is however, much sweeter than the nose would imply. The peat is non-aggressive and translates well from the aromas. Malty and biscuit, evocating light baked goods. Pepper and cinnamon and a slight level of astringency (perfectly in balance with the sweeter peat and fruit notes) come together with a rather mineral, almost sea-shell-like quality.

Expectations have been met. Kilkerran 12 year old shows great balance, excellent depth and complexity for its 12 years of age.  Now the final icing on the cake: this bottle is priced at around £35 (at least it should be - some retailers have decided that high demand and present supply necessitates price scalping – do not support this practice, just wait and Glengyle will release more soon) which represents simply fantastic value for money. A hearty Dramble recommendation and a bottle which is both ‘must try’ as well as promising of a bright future for the Kilkerran range.