It’s unlikely that you’re going to be effusive about every single whisky that’s put before you. Indeed, as taste is all a matter of opinion, we’re naturally going to be predisposed to enjoy somethings more than others. Samples are therefore a great way of trying a whisky before committing to buying a whole bottle. You can do this via outlets like Drinks By The Dram, or, even better, find some fellow enthusiasts and get swapping!

Whilst whisky worrywarts would have you believe that NAS whiskies are a scourge of the modern marketplace, their origins can actually be traced back to the 19th Century. There’s a raft of documented near ancient bottlings without an age-statement between them. Indeed, in the early 20th Century blenders would sometimes utilise an average age-statement – little better than a guess by modern SWA rules and regulations. Nevertheless, there is of course little uncertainty that aged stocks have come under increasing pressure in recent years – and that NAS bottlings have been utilised to fill holes in distillery inventories as much as they have to push the boundaries of experimentation.

The modern version of Glengoyne 10 year old has its origins back in 2006 - a few years after current owner Ian Macleod purchased the distillery and the Lang’s brand from Edrington. Though unspecified on the front the bottle, the Glengoyne website indicates that the expression is created from European and American oak sherry casks – certainly that comes through in the profile, but I’d be surprised if a fair amount of ex-bourbon was not in the mix here also. It’s bottled at 40% ABV and could be acquired at Master of Malt for £31.90.

This venerable version of Glengoyne’s 10 year old hails from the early 1980’s and is described as a Pure Malt. I estimate its bottling date as between 1982 and 1985 – roughly around the  time when the distillery (under Edrington’s management) were commemorating their whisky being first bottled at 10 years of age. Prior to this, the only other age-statement bottling I can find from the distillery is the Glengoyne Malt Black Label 8 year old from 1973 – produced when Lang Bros and Robert & Baxter Group had yet to merge and morph into the modern day Edrington.

Every distillery has a certain sense of uniqueness about it – from equipment (which is sometimes adapted and retrofitted in-situ), custom distillation processes, differing maturation regimes, and of course the biggest variable of all – people. Highland distillery Glengoyne has several noteworthy distinctions. Its geographic location under Dumgoyne (a 1,401 ft peak formed from a volcanic plug) puts the distillery itself in the Highlands region, whilst the over the road warehousing are technically in the Lowlands. It is one of very few distilleries to use entirely air-dried barley (the low yield, high quality Golden Promise – also utilised at Macallan), and similarly is amongst a group of sites to have ridden out the various downtowns over the past two centuries and therefore has operated continuously since its inception in 1833. 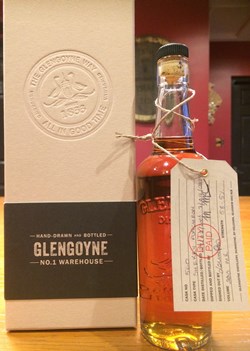 Glengoyne’s higher end tours offer visitors the opportunity to enter the distillery’s No.1 bonded warehouse and draw a dram using a copper dog directly from either an ex-bourbon cask (somewhat unusual given Glengoyne’s focus on sherry) or a more typical sherry puncheon. Following a relaxed sampling in the distillery manager’s house, you can bottle either (or both from an additional £50) in a 20cl bottle to take home with you. A particularly fun memory to take away from your time at the attractive distillery.

Glengoyne 18 year old was launched in 2012 alongside a new 15 year old. Their introductions consigned the previous 17 year old to the archives, but opened up the distillery’s age statement range further. There’s now an expansive selection of core range sherried whiskies running from 10 through to 30 years of age.

Whilst there’s nothing quite like tasting whisky whilst standing in an evocative warehouse surrounded by slowly maturing casks, sometimes you have to accept the next best thing. So it was that I turned in to a live tasting with Glengoyne, streamed from their No.1 Warehouse. The session was ably lead by Distillery Manager Robbie Hughes and Brand Manager Robert Hendry who provided an insightful look at Glengoyne’s history, whisky and philosophy. 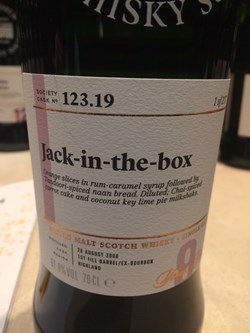 A 9 year old Glengoyne that was distilled on 29th August 2008 and matured in a 1st fill ex-Bourbon barrel. One of 217 bottles from the Young & Spritely flavour profile. 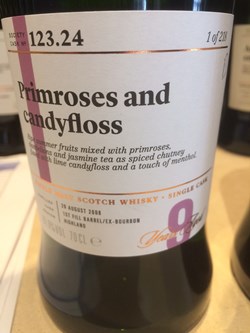 Over to Glengoyne for a 1st fill ex-bourbon barrel that was filled in August of 2008. Sweet, Fruity & Mellow profile. 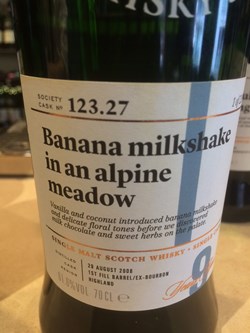 123.27 Banana milkshake in an alpine meadow 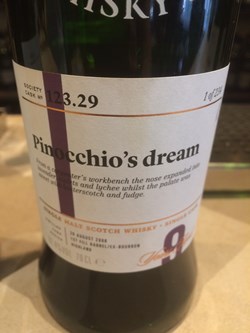 With a name like this, I’m expecting a youthful wood-fest. It hails from Glengoyne and is 9 years of age. Sweet & Spicy profile. 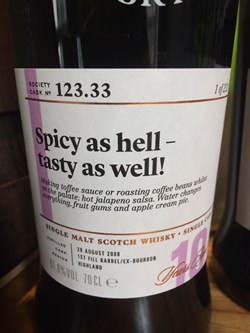 10 year old Glengoyne laid down in August 2008 in a 1st fill ex-bourbon barrel. View on SMWS

Apologies for tardiness today - but a full PC rebuild will do that to the best of us - and always tends to come at the least helpful moment. Grrrr. Anyhow, back to the business at hand...Boutique-y’s first batch of Glengoyne was bottled back in 2018 (looks like there’s been four more since). The label highlights two aspects (no doubt there’s more that I’ve missed) of the distillery’s location and history in its bottle label cartoon. Firstly, the preponderance of walkers visiting the distillery – which is located on the popular West Highland Way. Secondly, the distillery’s original name of ‘Burnfoot’ – stylised here by the walking contingent having to traipse across a road of hot coals.