In the space of a single evening I flew over Dufftown like a bird, submerged myself in a bubbling washback, and admired the London skyline from a roof-top garden. Sounding more like a flight of fancy than an evening of whisky tasting, my near 600 mile journey was made possible through a VR-powered Glenfiddich/Nicholson’s Pubs brand experience. Virtual and augmented realities are now regularly utilised ‘tools’ for brand activation – designed to engender both engagement and word of mouth – whilst being a little bit cool along the way. Even though whisky is a tactile consumable VR is becoming increasingly common – Ardbeg, Glen Ord, Jura and Macallan have all explored experimental experiential experiences (try saying that after a few drams). But, how much virtual can the realities of the whisky world feasibly handle?

The Glenfiddich VR experience (Into The Mind of the Malt Master) is slick and immersive. But, at the same time, it offers less information than your common-or-garden barley, water and yeast tour. It has not been designed for the already converted enthusiast. A drone-recorded flight through the Highlands and over Glenfiddich’s formidably sized complex tugs on some romantic heart-strings whilst at the same time offering a sense of the scale of the distillery – but thereafter everything else, through necessity, takes on a rather more imaginary vision of both whisky production and consumption. In part, this is due to the technological constraints of VR – it’s a costly affair, and computer generating/capturing every nock and cranny in a still house or warehouse, whilst technically impressive would be practically impossible. But, importantly, this is also not an application where VR can truly add value to the whisky world.

Mapping a distillery for a full virtual tour, would disregard many of the unique facets that make visiting in person so intrinsically fascinating – the sounds, the smell, the heat…..and let’s not forget real people, doing real jobs. It also, currently (perhaps never) cannot capture that moment of sharing and enjoying a dram – regardless of any geeky interest in the industrial side of things – the proof, is always in the pudding when it comes to a consumable. For those outside of Scotland, it might save you an airfare, but it would be no substitute for a reality-based experience at all. 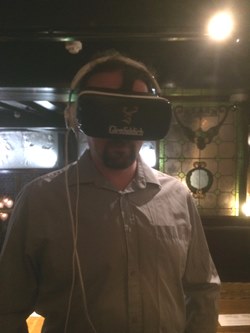 VR and whisky can sit together naturally as a means to stimulate different senses – the virtual reality, of sight, the actual reality of smell and taste. The two don’t seem interchangeable. But, as a tool to inspire potential new whisky drinkers, its power is obvious. Following my 5 minutes of looking like Robocop last week, Glenfiddich/Nicholson’s opened up their Mind of the Malt Master VR experience to folks in the venue simply out for drink after work. Following their 5 minute virtual Dufftown soiree they were treated to a glass of Fire & Care – more on that shortly. (Nicholson’s have the bottle exclusively in UK pubs for a short while).

As an engagement method the results are plain to see – whereas at many brand events you’ll usually see folks distracted by the lures of their phone and social media – whilst in their virtual bubbles, people are in essence a captive audience. A marketeers dream. But, whether or not the combination of technology and booze reinforces any long term brand awareness remains to be seen – at the end of the day, you still need to step out of the virtual world to experience the product itself.

Thinking wider about computer generated realities and their application to whisky, I’m surprised to have not seen more augmented reality – other consumer products have jumped at the chance to combine their wares with one of humankind’s favourite 21st Century preoccupations – that of being on their phones. Imagine being able to look at a bottle of whisky and be presented with information around its production and maturation – or in the case of common entry-level spirits, of recommended cocktail serves. This seems more fitting for whisky – where the reality of the product is merely enhanced, rather than removed altogether.

Glenfiddich’s Experimental Series #04 was released last Autumn in the form of Fire & Cane – a combination of peated (8ppm I read) and unpeated malt matured in ex-bourbon casks and then finished in ‘Latin’ rum casks. The bottling is an NAS and is available for £43 here in the UK.

Taste: The arrival and mouthfeel walks the line between being silky and being thin -  erring just on the former side. Toffee apples and poached pears are joined by gentle peat influence that builds through the development, taking on increasingly spicy characteristics – cinnamon, clove, nutmeg. The sweetness levels are well judged – marrying the underlying honeyed flavours of the Glenfiddich spirit with the reduced sugar influence of from the rum casks. In the back-palate, more typical ex-bourbon flavours of vanilla and creamy fudge.

On paper, Fire & Cane feels like a radical departure for the Dufftown-based distillery. I’m usually rather nervous when long-established sites start messing around with peat when it’s far outside their modern DNA. But, this experiment proves that my cautiousness was unwarranted - Fire & Cane provides a well-composed, well-integrated marriage of lightly peated Glenfiddich spirit with a cask finish that lifts experience with just the right amount of sweetness. To my palate, the rum influence offers an enhancement and balance (to the smoke), rather than delivering any overt rummy-ness. But, nevertheless, the two sit in pleasant natural harmony. Well-priced and well worth a look.