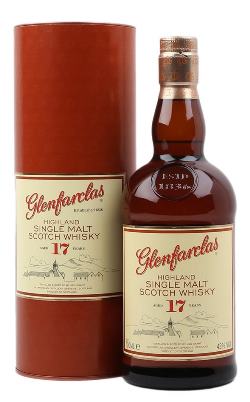 The 17 year old expression was originally released for the travel retail sector, and is described as combining the smoothness of Glenfarlas’s younger expressions with the greater depth of its oldest.

Nose: A lot going on here. Muscavado sugar mix it up with berries (some fresh, some dried) and in particular strawberries. Interestingly there’s a real minerality steeliness running through the nose. Quite biscuity and with some nuttiness also, florals play a supporting act and provide some immediate complexity. Orange peels give yet more fruitiness and alongside both toffee and vanilla there’s a whiff of smoke – not peat, nope, this is more cask smoke, possibly charring.

Taste: Sweet. Very sweet in fact. Strawberries again, and now stewed fruits sit alongside a variety of sugars, caster, icing and muscavado. The nuttiness is present again and joined by nice damp earthiness and a lot more spice than was on the nose – cinnamon and particularly cloves.

Finish: Medium to long with pure sherry coming through strongly and clove spice lingering through to the end.

I find Glenfarclas 17 year old to be an odd bottling in the distillery’s stable. It’s lighter, sweeter and fruiter than its 15 year old sibling, but also less full-bodied and well-defined. The central role of juicy sweet fruits rather than deeper richer sherried notes is an interesting departure, and sits well with a good dose of cask spice. However, the overall sweetness is perhaps a touch too high for my personal taste and I could not find a balance of water that managed to take the edge of this without reducing the fruit intensity. Worth trying for a slightly different Farclas experience, though quite pricey compared to other expressions.