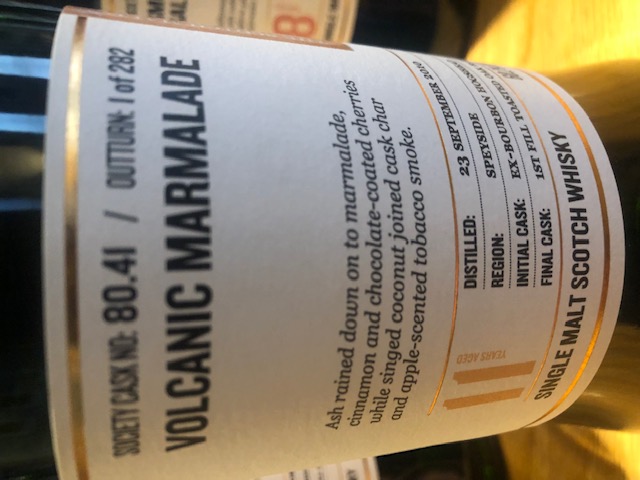 Interesting stuff here. Initially matured for 8 years in an ex-bourbon hogshead before being reracked into a 1st fill toasted oak barrique composed of Quercus macranthera – aka Caucasian/Persian oak. Colour me intrigued.

Nose: Volcanic indeed. Immediate sulphur from saltpetre and plimsole rubber. These both fade in the glass, but not entirely. Marmalade certainly, then Terry’s Chocolate Orange, powdered ginger and a peanut nuttiness. Aromatic and rather fruity tobacco leaf wafts alongside both rose hip and pumice. Dilution really worked for me here – markedly lessening Atomic No. 16 whilst adding cashews and Brazil nuts together with Bombay mix and additional ginger spices from ginger cake.

Nope. Straight out of the bottle I’m really not a fan of this interestingly casked Glen Spey – the sulphurous elements and intense spiciness mask many of the other nuances of the distillate. Taken down though – there’s a far more sociably acceptable dram here. As such I’ve scored somewhere in the middle – but for me, this is case-in-point why I believe that not all whisky is better or more desirable at its natural cask strength.