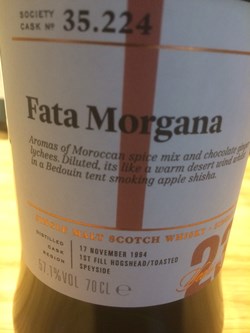 A Fata Morgana is an optical illusion caused by light being bent through layers of air with different temperatures. Often looking like castles or ships, some have suggested that the folklore tale of the Flying Dutchman might well have been a Fata Morgana. In terms of the whisky, it’s a 23 year old that’s been matured in a 1st fill toasted hogshead. View on SMWS

Taste: Intense spicing continues – pepper, cumin, allspice, mace, ginger and baking spices. These are joined by cocoa nibs, wholemeal bread and spent espresso grounds. The addition of water brings some fruit into the mix – apples and apple crumble, but it also emphasises the wood with some big cask flavours starting to take over.

Finish: Long, with a similar selection of exotic spices, but becoming increasingly tannic and dry.

A rather unusual Glen Moray that’ll appeal to the spice lovers out there. There’s a *lot* of wood here – on the nose it manifests itself as a fascinating and complicated spice base that would not be out of place in an Indian or Mediterranean kitchen. On the palate, things gets rather too oak-focussed for my liking resulting in moisture sucking dryness. Not my preferred style, but if you’re looking for spice, this is far from a Fata Morgana illusion.