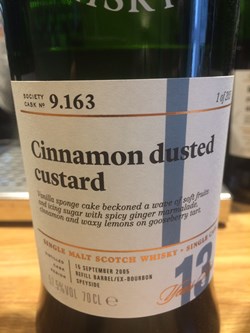 Lots of Glen Grant recently – this one, a teenager that’s been matured in a refill ex-bourbon barrel.

Taste: Mid-way between creaminess and oomphy bite – Vanilla custard, meringue and Chantilly cream enlivened with sprightly ginger and pepperiness. Apricot tarts, unripe apples and pear cordials are joined by steeped fruit teas and pressed laundry. Reduction adds citrus, zing and cream with a lemon posset and sabayon alongside tart gooseberry and a touch of rock-like minerality.

Finish: Quite long with milk chocolate and fading cinnamon and pepper spices.

A solid, creamy Glen Grant with plenty of cask influenced spices. No particularly thrills, but the balance here is notable, either neat (where it’s velvety) or reduced (where it’s sharper, sweeter and more citric).