I was chatting to a chap last week who was near the start of his malt journey. It was rather the familiar conversation. Having discovered a taste for peated whisky through the common Islay stalwarts (Laphroaig 10, Ardbeg 10 and Lagavulin 16), he’d noted two things – firstly that his palate seemed to be yearning to explore ever increasing levels of peatiness, and secondly that he was struggling to obtain many of the more interesting (read older or limited ed) bottlings from the Islay distilleries. Unfortunately, so it was….so shall it always be.

It’s all too easy for whisky geeks to get bogged down by the technical aspects of a distillery. Fermentation times, lyne arm inclinations, spirit cut points – all interesting – but sometimes a distraction from what’s right under our noses. Whisky tourism makes a considerable contribution to local economies (sometimes with perceived detrimental effects), and whilst its growth is certainly being spearheaded by an ever increasing fan base of whisky enthusiasts, the raw number of tourists (nearly 2 million each year) to Scottish distilleries reveals an allure that’s beyond our immediate community. People simply like pretty little things. 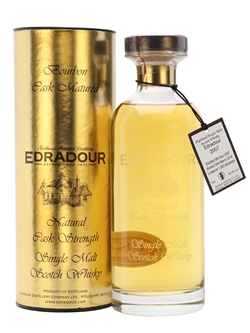 A big, heavy decanter is a nice thing. There’s just something oddly reassuring about pouring a dram from a weighty bottle. We’ve not really spoken about glassware on The Dramble before – truth be told there’s more than enough glass comparisons out there on fellow bloggers sites – and I’ll take some convincing that the 1920’s Blender’s Glass isn’t the best for reviewing with and the worst for cleaning thereafter. But, perhaps there’s more unique mileage to be had in us taking looking at decanters one of these days? Andrew Symington from Edradour/Signatory would probably think so – many of the distillery’s/bottler’s expressions come delivered in easily recognisable heavyweight glass. But, I’ll be honest – I have no actual no idea what an Ibisco decanter really is.

Historically Edradour has had a reputation for woeful inconsistency. Some bottles were good, some were terrible, but you’d be hard pushed to established a common thread between them. My personal experience of older Edradours has been a total shot in the dark. Far from reassuring, but sort of fun in a lucky dip kind of way. Since the distillery was purchased in 2002 by independent bottler Signatory Vintage, standards have dramatically improved. However, consistency has rather been turned on its head by Andrew Symington – the breadth of cask utilised is now mind-bogglingly wide. Edradour bottlings are still a lucky dip – just a much better one.

All distilleries have some elements of uniqueness – after all, what would be the point of a glut of homogenised liquid? Sites operate differing fermentation and distillation processes, divergent maturation regimes (a couple of days ago I visited a distillery where casks are being stored vertically on their heads?!), and sometimes have examples of one-of-a-kind equipment that either never took off elsewhere, or was superseded by history and progress. Edradour has plenty of uniqueness – it’s a beautifully weird place – but one thing which always stands out to me is its continued use of a Morton’s Refrigerator – the last one still in operation in the whisky industry. 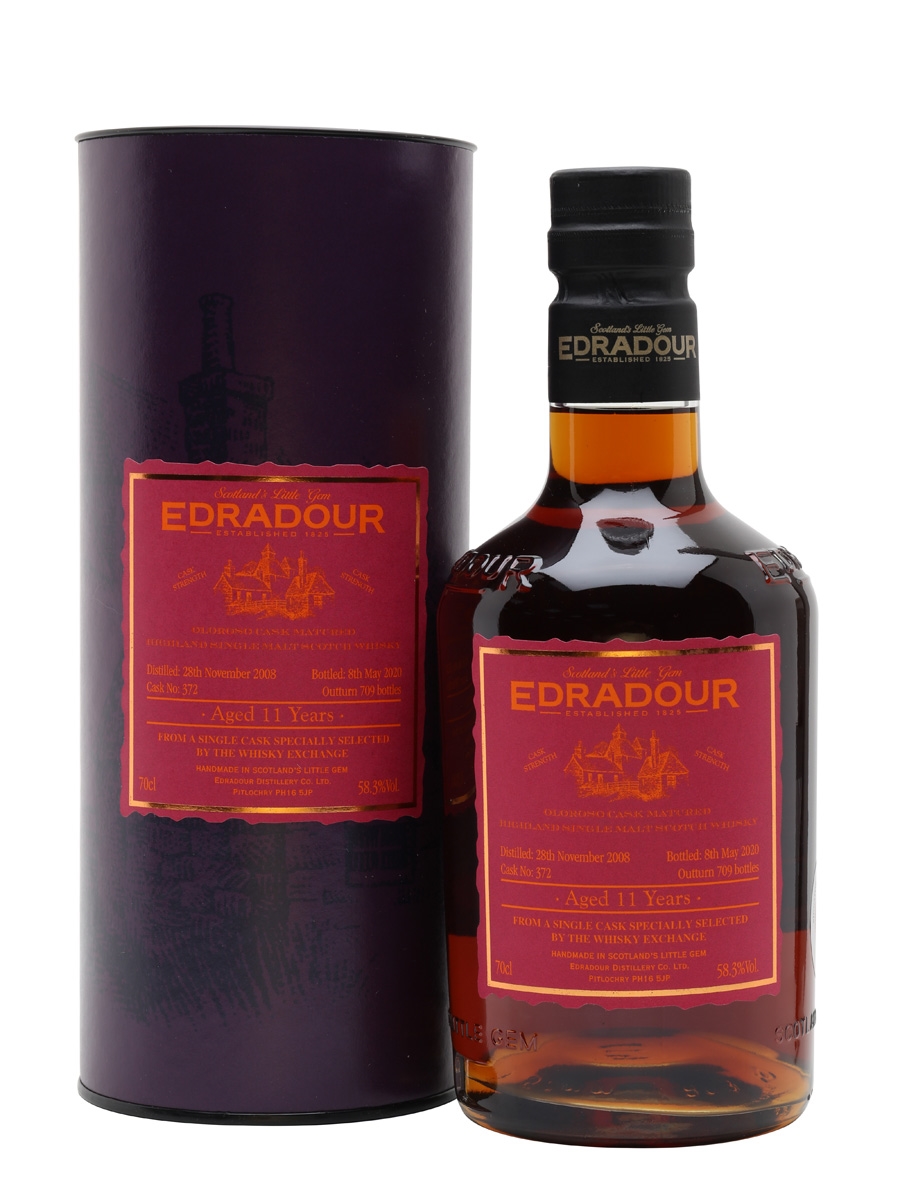 The Whisky Exchange’s latest Edradour is part of a duet, released alongside it’s peated sibling – Ballechin. Both have been given a full-term sherry maturation, with the Edradour matured for 11 year in 1st fill oloroso sherry before being bottled in May of last year (taken a little time to get to market this one). The cask (#372) was disgorged to produce 709 bottles – they’re available from the TWE website for £79.95.

Fear of missing out is described as “a pervasive apprehension that others might be having rewarding experiences from which one is absent”. And in the whisky world, I believe it to be just a prevalent as buyers regret. There’s a *lot* of whisky out there – over 6000 releases in 2018 alone, but for some, playing Pokemon with a bottling series, or distillery’s entire release calendar can become a near obsessive pursuit. Beyond that, craving and longing focusses on the individual bottle level – a stunning, historically significant or unexpected whisky that has an allure that feels irresistible – often to a whole host of people. Cue crazy auction results. I missed the release of today’s Edradour – but, having now tasted it, I’m rather kicking myself that I didn’t have a FOMO moment at the time. 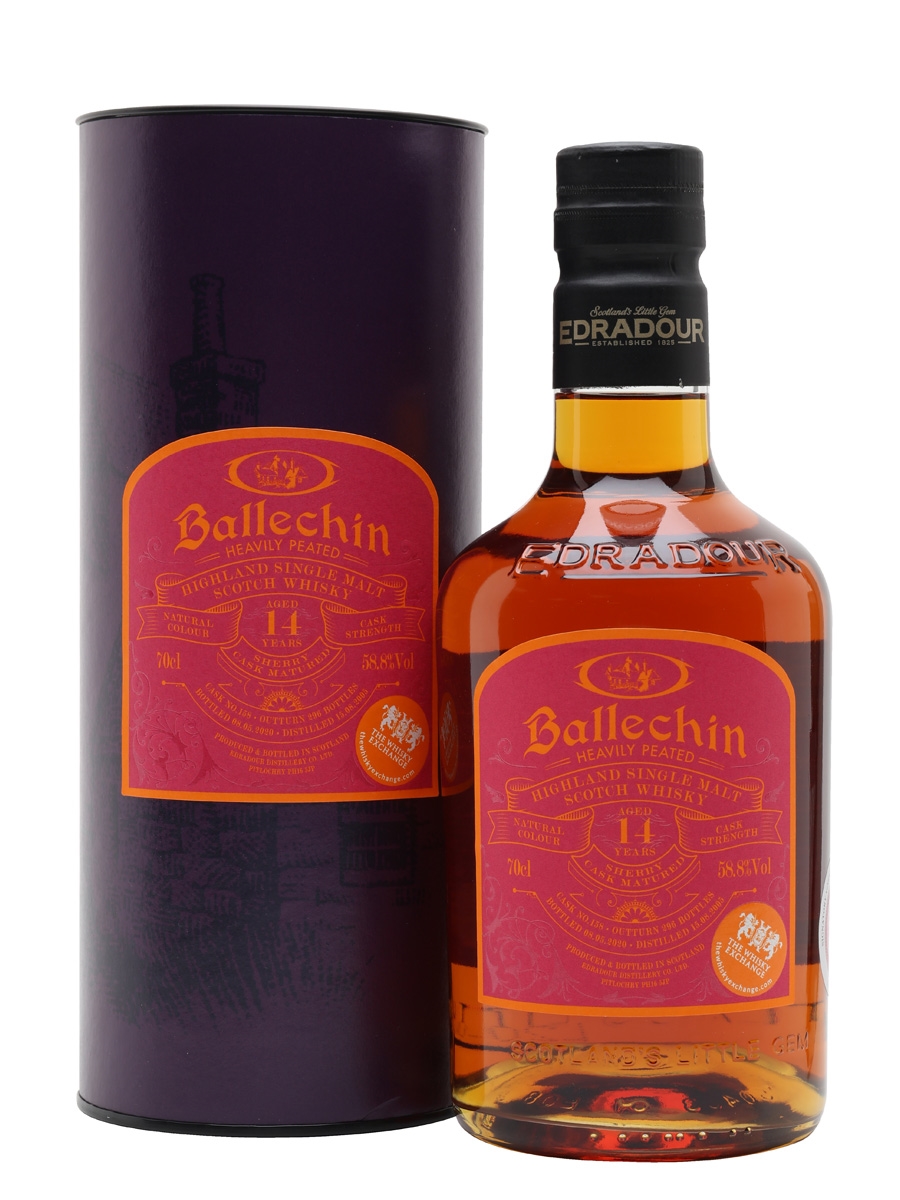 The flip side of TWE’s Edradour double-act is this 14 year old Ballechin – matured since August 2005 in a second fill sherry hogshead (#158). Bottled in August last year and producing 296 bottles – these are available from The Whisky Exchange for £94.95. 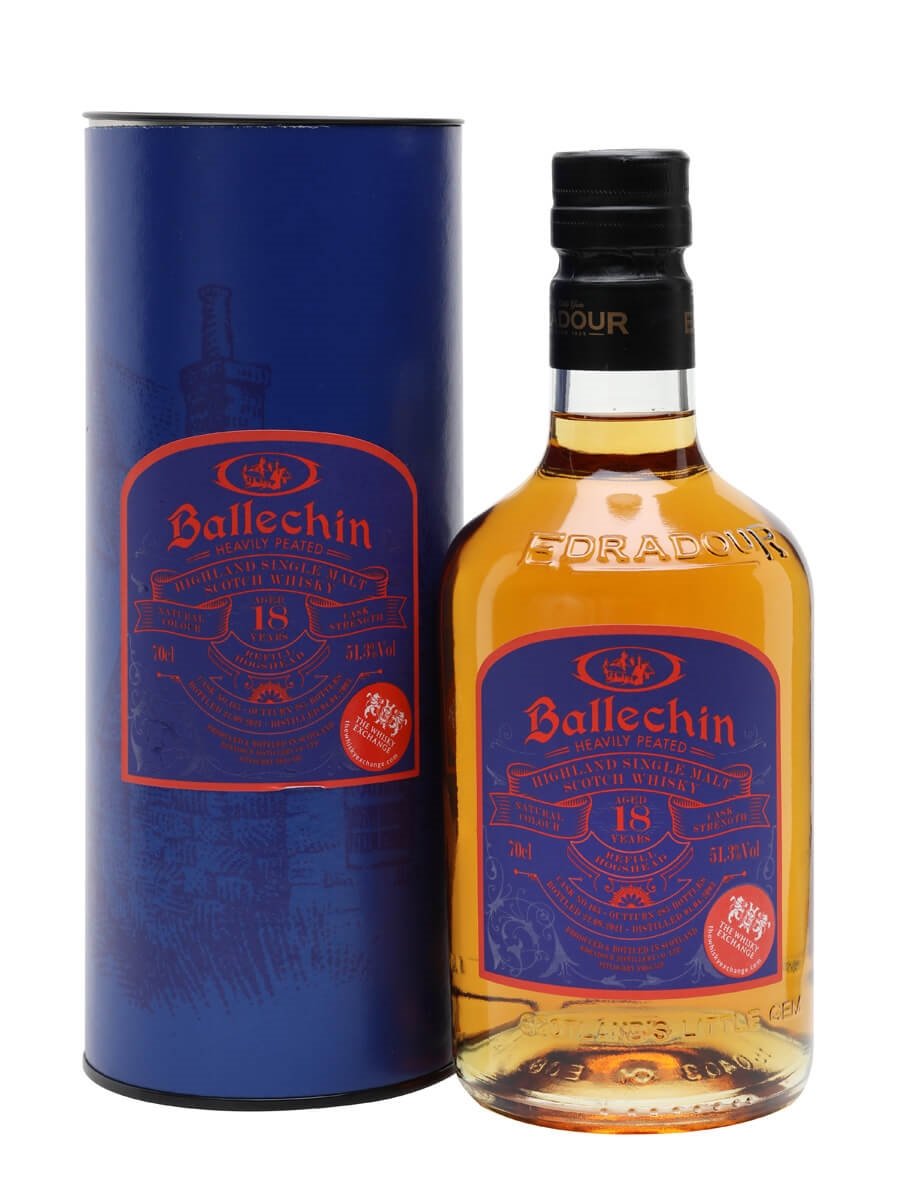 Another week, another Ballechin. No complaints for me – this is a distillate style that is rapidly gaining followers for a reason. TWE have acquired a single refill hogshead distilled back in 2003 and left for 18 years. The result has been bottled at 51.3% ABV and clocks in at £175.

Drinkers are perennially obsessed with bottlings which sell out. How many were there? (few) How quickly did they all sell out? (very) And how many will appear at auction next week? (lots). When it comes to whisky in 2021, I’m honestly surprised that folks are still astounded by any of this. Flip the switch to the opposite direction – and you’ll find that seeing which releases *didn’t* sell out on impact can offer far more insight into the modern market than glancing into the rear-view mirror of blink and you’ve missed it whisky.

Over to Edradour for a welcome visit to the distillery’s peated output – Ballechin. This one has spent 14 years in a refill sherry hogshead before being bottled at 55% ABV.

A second turn round the merry-go-round of combining Edradour with Ballechin. This edition takes a 2005 Edradour and a 2005 Ballechin that have both been matured in 2nd fill sherry hogsheads for 16 years and smushes them together with a reduction in ABV to 55%. Available from Decadent Drinks for £165 (again discounted by 20% at present).

Ballechin 2004 The Sands of Sponge

The opening panel of Whisky Sponge’s ‘Spongetopia’ Ballechin triptych has been matured full term in a 1st fill ex-bourbon barrel for 17 years and then offered up at its natural cask strength of 53.7% ABV. 188 bottles were produced of the now sold out expression – all adorned with the ‘Spongelith’ – part Kubrick, part closing shot of Planet of the Apes. All Sponge.

Ballechin 2004 The Triumph of Influencers

The middle chapter of ‘Spongetopia’ is the only edition that is still currently available for purchase. It's a 17 year old Ballechin that’s been fully matured in a refill fino butt that has delivered 623 bottles at 55.5% ABV. The dystopian artwork features an emaciated selection of cookie-cutter whisky ‘influencers’ – presumably reflective of the entirely unnourishing results of spending all of your life photographing closed bottles in places where they don’t belong. (I’ve got another suggestion of where ‘influencers’ could shove their bottles). Those interested will find Edition 36B still available (as of writing) on the Decadent Drinks shop for £137.50. 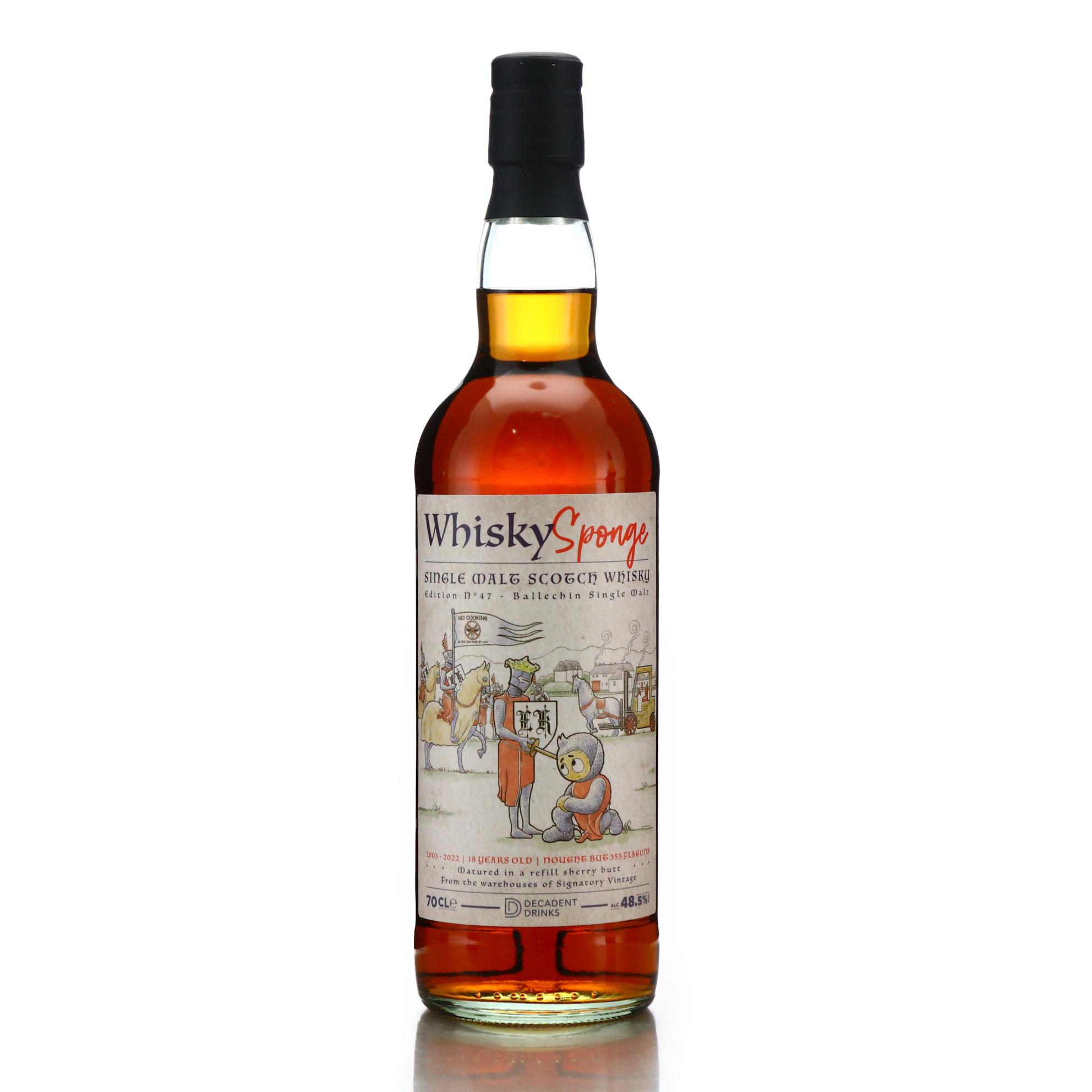 Being released this morning, medievally styled Whisky Sponge Edition 47 hails from the kingdom of Edradour in the form of an 18 year old Ballechin matured in a refill sherry butt. As old as the distillate currently gets (to the best of my knowledge) this release is bottled at 48.5%. I don’t yet know the price (edit: £215 via Decadant Drinks) – but I’m certainly interested to find out as it’s very much my speed.

It’s hot in the UK right now. Too hot. But whilst I’m feeling weary, fatigued and a little sluggish that doesn’t necessarily mean that I’m being entirely unproductive. Things are just taking a little longer at present (like writing - sorry folks). The same is true of oak – it is a false assertion that a tired cask is an entirely dead cask – there are methods to both reinvigorate wood and to utilise and harness its characteristics at a point where it exhibits lower levels of activity. Indeed, some of the most famous and lauded bottlings have been matured in wood which nowadays some would argue was knackered. 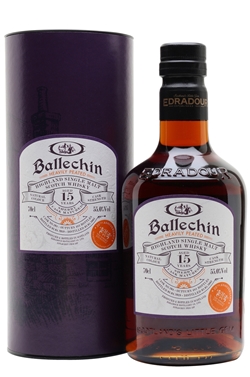 Is the dark side stronger? There were certainly times at this year’s London Whisky Show when I was left wondering. The energetic camaraderie and palpable buzz of excitement of the (longest I’ve ever seen it) queue outside the venue quickly faded when the doors opened and a veritable bun fight immediately began to join a second queue – to make purchases. The tannoy welcoming arrivals, could almost have announced the opening of ‘the 2019 whisky shop’. The jostling turned into barging, and smiles turned to grimaces as folks quickly realised that turning up several hours early is simply not good enough to guarantee scoring that particularly desirable bottle nowadays. And then there was Sunday…