My liver doesn’t thank me for it, but running both a whisky club and being an enthusiast writer means that I get to drink rather lot of whisky nowadays. Always a pleasure, sometimes a bit of a grind – but there’s one experience I never seem to tire from and that’s visiting distilleries. I’m recently returned from the annual Dramboree gathering up at Loch Lomond, and my fondness for wandering round what are essentially industrial plants is still unwavering – and I have Deanston distillery and owners Distell to thank for this.

Dramboree is as much about friends and relaxing as it is about great whisky, but as well as the (im)famous dram table, there’s always a weekend trip to a distillery, and this year’s was one of the very best I’ve had the pleasure of attending. Deanston pulled out all the stops to create a superb whole-day experience – even managing to offer us both Master Blender Kirstie McCallum and Group Distilleries Manager Simon Woodcock to lead both a technical tour, as well as two masterclass tastings. It was the perfect mix of personality, history, detail – and of course high quality whisky. It’s a visit that I’d heartily recommend to anyone not yet acquainted with the distillery and its expressions.

As Dave Broom pointed out on Scotchwhisky.com last week, all distilleries are in essence unique – so we won’t fall into that trap here. But, there are certainly several features at Deanston which are distinctive and worth highlighting. Despite being constructed in 1785, there’s not a pagoda roof to be seen at Deanson – the site spent its first 179 years as cotton mill providing jobs for the local population. The decline of the Scottish cotton industry and the site’s proximity to the River Teith led to the extensive buildings being converted into a distillery in the late 1960’s. The watercourse had already been diverted directly into the building, powering four huge water wheels (the largest in Europe) which drove milling – these were adapted into a hydro-electric turbine house and process over 20 million litres of water an hour. They still provide all of the power needs for the distillery some 50 years later – an even produce enough power to be able to sell the excess back to the National Grid. 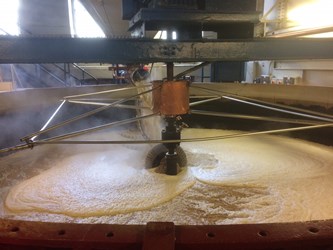 The mash tun at Deanston is cast iron and open-topped – not a common sight by any means, but there are other distillery’s employing them - Bruichladdich, Fettercairn and Royal Lochnagar spring to mind. Deanston’s however, just might be the largest of its kind – taking in 10.52 tonnes of grist per mash.

Fermentation takes place in eight 60,000 litre washbacks and is exceptionally long – over 100 hours – producing a large volume of esters in the wash. Apparently this style harks back to the original character of Deanston when it was first constructed. It is reinforced by potstills with plenty of reflux (boil bubbles) and lyne arms with a slight upward inclination. 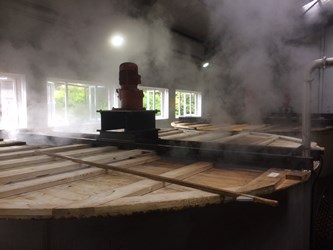 Perhaps one of the most interesting features at Deanston is its warehousing. Taking place in inside of the old milling floor (where once hundreds of workers would have toiled daily on cotton looms), the ceilings have more in common with a Spanish sherry bodega – arching and curving around a series of central skylights (which were subsequently sealed up). The style and materials of the milling floor allow for a space that has a very constant (and low) natural temperature – ideal for the maturation of whisky. 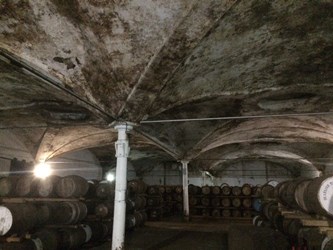 No tour is complete without tastings, and Dramboree was treated to two of them. Firstly, a cask tasting of experimental whiskies with Kirstie McCallum, which in many ways turned out to be as much a masterclass in cask quality and selection as it did a more traditional warehouse experience. Secondly, a selection of upcoming expressions from across the Distell portfolio – Bunnahabhain, Tobermory (and their peated whisky Ledaig), and of course Deanston. The Dramble will bring you reviews of all these whiskies in due course when they’re ready for bottlings and release – but, suffice to say, there’s some cracking stuff on the way.

Today, we’re going to be looking at one of the recent Deanston exclusive bottlings – Decennary - which was created to commemorate the 50th anniversary of the distillery and released towards the end of 2017.

Nose: An immediate strong orange aroma – Robinson’s orange barley water and orange infused tea. This is combined with a touch of chocolate, a hint of coffee and just a dash of old dried tobacco. Expressed throughout are ginger nut biscuits – soft and buttery. Straight-forward, but all very in tune and quite appealing. The addition of water broadens the aroma palate – apricots and peaches and rose flavoured Turkish Delight.

Taste: An arrival of soft, juicy and silky fruits – tinned syrup – there’s some texture here. Peaches and apricots lead, but with some more discernible portpipe influence now – red berries – and then our combination of oranges once more. The fruits are all exceedingly bright and well-defined. Deeper, chocolate, Ovaltine, touches of liquorice and ginger. Reducing with a little water initially disrupted the balance of all these elements – though they returned into harmony within a few minutes. The effect expressed cask influences – touches of oak, vanilla and heightened ginger.

This celebratory Deanston has some real confidence about it. I find the overall integration of elements quite stunning – no sharp edges here. Whilst the precise volumes of the four individual casks are not known (when are they ever barring our friends at Compass Box), each feels like it has its place here – touches of age and elegance, bright stone and berry fruit and a well-judged level of overall sweetness. A subtle tasty treat.