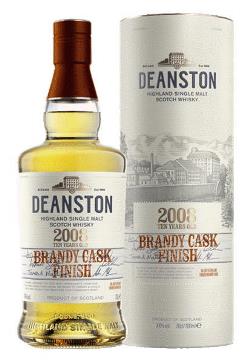 Back in August, Distill announced six new limited release whiskies drawn from across their portfolio of Bunnahabhain, Deanston and Tobermory distilleries. Launched at what the company suggest was their first annual whisky showcase – ‘The Malt Gallery’ – the expressions are now starting to see the light of day. The Dramble attended a masterclass tasting at Deanston distillery tasting earlier in the summer where these upcoming releases were presented for the first time – as such, as the new bottlings appear on the shelves, we’ll be bringing you our tasting notes at a (roughly) similar time.

The first two bottlings out of the gate are Bunnahabhain 2008 Moine Bordeaux Red Wine Cask Matured (which we’ve obtained by as yet not opened – watch this space) and Deanston 2008 Brandy Cask Finish. Oddly, there seems to be two versions of the Brandy Cask bottling out there - or at least two different listings for it - one version is shown by retailers as 9 years of age, the other a 10 year old - both are from 2008 and with the  exact same ABV, so perhaps there was a labelling error somewhere down the line?

Nevertheless, our bottling is the 10 year old version - matured for 8 years in ex-bourbon before being moved to ex-brandy casks for a two year finishing period. The expression is delivered at 56.4% and presented naturally coloured and non-chillfiltered.

Nose: The brandy influence is immediate – grape spirit, grappa and cocoa powder. It sits atop of variety of dried fruits – hedgerow berries and apricots – macadamia nuts and drinking chocolate. In the background, earthiness – wet soils, mossy greenness and fallen autumn leaves. Upon pouring, the ex-bourbon influence is quite heady – young, sappy, slightly raw oak – resting smooths this out greatly, refining the aromas towards vanilla custard and coconut shaving. Reduction results in an unusual meatiness – beef sausages?! – as well as a heightened sense of sweetness from honey.

Taste: A viscous and sweet arrival of orchard fruits (apples and pears), toffee and milk chocolate. Then, the brandy cask takes hold delivering grape liqueur, tartness and some drying tannins. In the mid-palate, coffee beans and mocha provide richness, but these quickly pass in the back palate for a rather boozy and particularly oaky later development. Again, as with the nose, resting provides a smoothing effect, tempering the overt oakiness and allowing the whole to express itself with more clarity (and less wood). The addition of water is a double-edged sword – fruits are juicy, tinned and syrupy (with the addition of peach) – but at the same time, pronouncing oak even further.

Finish: Medium in length, with sprinkle of white pepper, a hint of salinity and plenty of wood – sawn planking and chips.

Deanston 2008 Brandy Cask Finish requires more patience than its 10 year of age would suggest. Both the nose and the arrival truly do express the brandy cask finish here – this is certainly noteworthy, as all too often finished whiskies have little to no defined semblance of the actual precursor liquid they’ve been matured in. But, straight out of the bottle, the initial ex-bourbon maturation feels somewhat heavy-handed and overwrought here – a 15 minute resting period leads to a much more harmonious marriage of spirit and wood. Likewise, despite the higher ABV I found dilution to be a disbenefit in terms achieving a good balance - woodiness still reigns supreme. Your mileage might vary, but to my taste, this is only party successful.