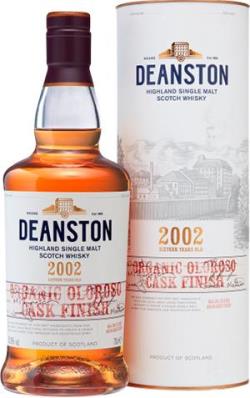 The Deanston 2002 Organic Oloroso Finish is produced from organic barley (locally sourced from farmers) and initially matured in rejuvenated ex-bourbon casks (decharred and recharred to remove all organic precursor liquids). It is then transferred to organic oloroso casks from Bodegas Robles who are located in the Montilla-Moriles of Spain. Whilst far from the only winery in Spain to have gone fully organic over the last decade, Bodegas Robles are the first Spanish winery to accurately calculate their carbon footprint and to commit to reducing it each and every year.

Nose: Super big on strawberry. Freshly picked and scattered across the top of a creamy Eaton Mess, confectionary types – bootlaces and Chew-its, even in liquid form – a rich and creamy Strawberry milkshake. Quite remarkable. Running throughout, soft raisins and caramel wafers with a side of honeysuckle and cinnamon stick. Dilution adds wider red fruits with redcurrant jelly and scattering of cacao nibs.

Taste: Syrupy and viscous in the mouth – there’s both weight and texture here. Red berries (mainly strawberry in no surprise to anyone) are joined by raisins and sultans atop a chocolate ganache filled sponge cake. Rich toffee and digestive biscuit crumb sit with lacquered wood and a touch of minty menthol in the back palate. The addition of water expresses the oloroso sherry further with chocolate sauce, honeycomb and hints of tanned leather

Irrespective of its eco-conscious origins, this Deanston is just plain delicious. It’s defined, bright and extraordinarily fresh, demonstrating a seriously deft touch when it comes to sherry cask finishing. The balance is outstanding – aromas and flavours all feel precise and exactly where they should be, and the cask influence enhances rather than detracts. A clear standout from this year’s Limited Releases and the sort of whisky which should seriously raise the profile of the distillery. You're 100% fighting me for a bottle.