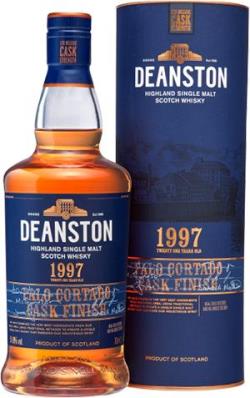 Palo Cortado is a hybrid sherry – in effect a halfway house between amontillado and oloroso, possessing the nutty nose of the former with the rich body of the latter. Traditionally, it would have been created through happenstance – with a biologically aged sherry losing its layer of protective flor and then continuing its development oxidatively. If you believe the spiel from the bodegas, the reasons for this transformation are shrouded in mystery – some barrels simply transition naturally into Palo Cortado – and no one truly understands why.

That might have been true once upon a time, but nowadays, most Palo Cortado is created quite deliberately - cellarmasters fortify liquid which was destined to become fino sherry (to around 17-18% ABV at which point flor cannot form) and force it to age oxidatively.

This 1997 Deanston was initially matured in ex-bourbon casks and then re-racked into Palo Cortado hogsheads for an unspecified finishing period. It’s bottled at 51.8% ABV and has an RRP of £150.

Taste: Delivered thickly and texturally with an arrival that has real impact – hedgerow berries, Black Forest gateaux and chocolate hazelnut spread are combined with orange liqueurs, toffee sauce and brown sugars. There’s a creaminess here – whipped Chantilly and crème patisserie – that’s tempered by a slightest edge of minerality – earthy, dry and somewhat crystalline. In the mid-palate, hints of wood polish, dry oak, raisins, sultanas and suede leather. The addition of water releases stone fruits (apricots and peaches) alongside more creaminess in the form of latte coffee.

Another particularly tasty sherry-finished Deanston – in this case with a wonderful sense of creaminess that feels a world apart from your common or garden sherry butt. This is sherry for grown-ups – integrated, layered and packed with subtleties.