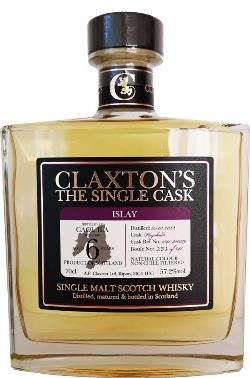 Peat smoke expresses itself quite differently depending on the length of maturation – fiery and bombastic with youth – relaxed and refined with age. With younger spirit it can sometimes hide a multitude of sins, from undone, feinty spirit to poor cask integration. Particularly for whiskies where intense peat is not part of their DNA, there are times it can feel more like a sticking plaster. Then, there are other times, where the inherent character of the spirit naturally suits younger, intense peating. Caol Ila is one such whisky. Indeed, to my mind, one of the strengths of this distillate is in how well composed it appears at virtually any age.

Interestingly, I prefer my Caol Ila either old and tranquil – where the peat smoke becomes almost a backnote – or, exceptionally youthful where the peat can be formidably intense. Today’s well be taking a look at an example of the latter.

Not quite new kid on the block, but quickly developing a reputation for good cask selection – Claxton's have already bottled several examples of Caol Ila – all of them from 2012 at a mere six years of age. Two of them come from sister casks – bourbon hogsheads that have then been finished in PX – the final is delivered eau natural straight from ex-bourbon. That’s the one which caught my eye when I met up with the team at the small, but rather lovely Harrow Whisky Festival last month.

Hogshead 1841-300379 was laid down on 5th January 2012 and bottled towards the end of 2018. 341 bottles were produced at an ABV of 57.2%. Released for an initial price of £59.99, the bottling has sold out in most of the usual places, including via Claxton’s themselves – however if you scout around you’ll find a few retaillers still stocking it – alas, for prices not quite at the same level as the RRP.

Nose: Crystalline and powerfully peated. Quartz and coastal rocks sit with bacon crisps (Frazzles), hospital floor cleaner and sea water. There’s a solid fruity vein running throughout, primarily lemons (this is Caol Ila afterall), but also some ripe crisp apple. In the background, a touch of damp earthiness. Reduction takes some of the heady pungency away, but still preserves the strong smoky character – it adds sweetness with biscuits crumbs, honey spread bread and some notes of engine oils and waxiness.

Taste: The arrival is big and punchy, delivered with some good viscosity. Smoke is a marriage of coastal and hospital – smoked fish, granite and shale with iodine, bandages, antiseptic and axle grease. Lemons are more pronounced here – sharp and tart and sitting with plenty of salinity. The back palate presents a slightly different shade with the smoke becoming more ashy and oak presenting itself as wood lacquer. The addition of water adds to the sootiness with coal (caol) sheds, engine lubricants and mineral dust, whilst also upping the sweetness with burnt toffee, apple and pear.

Finish: The long side of medium – salt, lemon and sustained fading medicinalness.

I’ve long had a soft spot for young powerful Caol Ila and this Claxton’s 2012 6 year old ticks all the boxes I’d expect from a bottling of this age. It’s packed full of aromas and flavours that offer both big smoke influence, but also plenty of chiselled coastal character. It might be rather uncouth and unrestrained, but to my mind, the inherent spirit character of Caol Ila suits this somewhat rare delivery well. As aged expressions steadily become more expensive, don’t make the mistake of thinking that younger (and relatively cheaper) bottlings can’t deliver oodles of powerful flavour and character. They can.