The very model of a modern major mineral 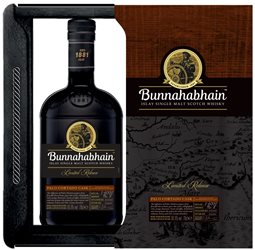 The 1997 Bunnahabhain is the most expensive of Distell’s 2018 limited releases. It’s also one of the last to reach the market. Packaging issues have been cited as delayed the release of this eagerly anticipated expression – fair enough – the nice box does look nice. It’s now starting to hit the shelves and with just 1620 bottles (with a mere 300 allocated to the UK market), it will no doubt sell out in double time.

Palo Cortado is a hybrid sherry – in effect a halfway house between amontillado and oloroso, possessing the nutty nose of the former with the rich body of the latter. Traditionally, it would have been created through happenstance – with a biologically aged sherry losing its layer of protective flor and then continuing its development oxidatively. The myth and mystery from the Spanish bodegas might sound romantic, but nowadays, most Palo Cortado is created quite deliberately - cellarmasters fortify liquid which was destined to become fino sherry (to around 17-18% ABV at which point flor cannot form) and force it to age oxidatively.

Palo Cortado’s name seems to derive from the internal classification system used by bodegas to mark barrels with their contents. A near vertical chalk line (palo – which translates as stick) indicates fino/fine sherry - this palo line is crossed through (cortado) with a horizontal or slightly diagonal line forming a cross. These chalk classifications allow the bodega’s cellarmasters to assess, at a glance, which barrels are set aside for particular varieties of sherry, and likewise to note fino type sherries which might be suitable for fortification into Palo Cortado.

The Bunnahabhain 1997 has been matured for 19 years in ex-bourbon before being re-racked into Palo Cortado for a finishing period of almost two years. It’s bottled at 54.9% and comes with a price sticker of a cool £275 – around £50 shy of the award-winning (and most excellent) 25 year old core range release. It’s worth noting that those of you visiting Islay in the near future have the option of a more affordable (ergo younger) Palo Cortado Bunnahabhain in the form of a 2005 distillery exclusive bottling. Similarly to its older sibling, this has matured in refill ex-bourbon before being finished.

Nose: Complex and developing in the glass – this opens with salted popcorn, cookie dough and cashew nuts – evolving into poached pears, apricot yoghurt and soured lemons. There’s plenty of minerality here – part limestone cliffs, part straight up steeliness. In the background, a swirling veil of light, but earthy smoke, alongside saw dusted floors, a touch of cinnamon and some herbaceous moss. A touch of dilution brings forward bright berry fruits (raspberry and cranberry), as well as adding hints of mocha and toasted bread sticks.

Taste: Nicely oily and viscous around the month. The arrival delivers sweetened tinned fruits (orchard and stone), paired with cinder toffee and jammy red berries. The salty steeliness remains – chiselled and maritime. It’s joined by surprisingly overt smoke – pungent and earthy, rather akin to something hailing from Campbeltown rather than the north coast of Islay. Polished lemons add both sweet and sourness and are supported by salted peanuts, a scattering of raisins and golden syrup. The mid to back-palate reveals vegetal earthiness – wet soils, bracken, autumn leaves and mushrooms, as well as touches of menthol and eucalyptus. The addition of water heightens the reduced fruit flavours into a sticky syrup, as well as adding some chalky aspirin.

Finish: The long side of medium and playing sweet off against sour – honey and caster sugar with tart berries, minerality and drying earthiness.

Bunnahabhain 1997 Palo Cortado Cask Finish is rather enthralling stuff. Marrying biting minerality with sweet and rich sherry lavishness, it’s well-composed, multifaceted, and significantly different to the other OB Bunna’s currently available in the distillery’s line-up. On the one hand, it’s a whisky with a level of opulence sufficient to sit back with and let the worries of the world pass you by – on the other, it possesses a level of intricacy that requires time to patiently unpick. The price point is alas less user friendly. £275 (and with several retailers already pitching in above this price) is a big ask for a 20 year old whisky, and certainly puts this limited release out of reach for many enthusiasts. But on the liquid quality alone, this is highly recommendable.