A front runner from Buffalo Trace 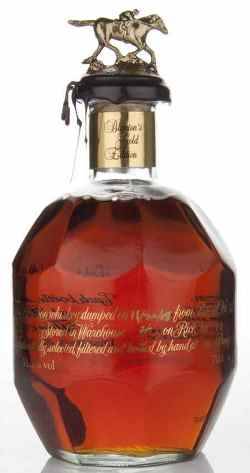 Blanton’s is a brand of Frankfort, Kentucky based Buffalo Trace – their bottling hall being named after Albert B. Blanton, one of the pioneers of the 20th Century bourbon industry. Introduced in 1984, by then distillery master Elmer T. Lee, in the year before his retirement, the Blanton’s brand focusses on single barrel bourbons (where bottles are drawn in batches, one cask at a time, and are not mixed or blended with any other barrels or spirits). The Gold Edition of Blanton’s draws its origins from the standard Single Barrel version, but it’s delivered with a bit more grunt at 51.5% ABV.

Each bottle of Blanton’s Gold Edition comes with a fair amount of barrelling information printed around the bauble shaped glassware. My bottle was ‘dumped’ on 1-16-15 from barrel number 498, having been stored in Warehouse H on Rick (another name for a storage rack) No. 44. Each bottle comes with a chunky stopper adorned by a jockey riding a horse  - it’s a highly distinctive feature that along with the slightly unusual bottle shape makes Blanton’s really stand out on a bar shelf. Each bottle has a different letter from the Blanton’s name embossed into the metal near the back of the horse’s legs. Those with a Pokemon mentality therefore can attempt to ‘catch’ all eight different letters. If you have an eye for detail you’ll note that the poses of the horses also change across bottling – representing the stages of a race – from starting gate to crossing the finishing line.

Blanton’s Gold is described as an ‘international edition’, which basically means you won’t find it in the States very easily – I’ve seen it regularly in travel retail around the world, and here in the UK it’s pretty easily located. A bottle from Master of Malt will set you back £65.82 as of writing. It sits in the middle of company’s single barrel range – the entry point of ‘Original Single Barrel’ will cost you around £50, the undiluted ‘Straight from Barrel’ (with ABV’s well into the mid-60s) well set you back closer to £85.

Nose: An enticing mix of cherries and berries. Dark fruits – blackcurrants, plums and raisins are joined by lighter and brighter fruitiness – cherries especially, but also some tangy citrus. Toffee, creamy fudge and freshly baked pastries are joined by earthy hay notes, a touch of varnish and some spiced elements – cinnamon and nutmeg. A very welcoming start.

Taste: A syrupy mouthfeel is followed by a surprisingly delicate flavour delivery – spiced plums, berries (and cherries again), bright corns, vanilla and some grassiness – hay and potpourri. There’s a great mix of sweetness and bitterness here – brown sugars, toffee and molasses playing off against cinnamon, slightly astringent oak and black better. A few drops of water softens the fruits and adds both more woodiness as well as some tanned leather.

Blanton’s Gold might possibly be my favourite bourbon at the moment - I’ve always got a bottle lurking somewhere on the bar. Despite being a higher proof than Blanton’s Single Barrel, the Gold Edition manages deliver subtle and consistent flavour alongside some really smart balancing of its sweet and bitter elements. The higher ABV delivers helps these flavours with good definition, whilst avoiding the pitfalls of allowing any one note to overly dominate. Spicy, drying, fruity but restrained – I’d heartily recommend this one.