Posted 04 September 2017 by Matt / In Bruichladdich 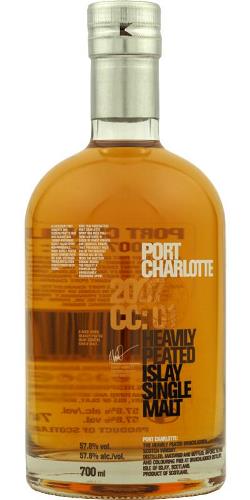 Bruichladdich currently have several travel retail bottlings available – the Laddie Eight which we’ve already looked at, various Octomores (usually the wine cask finished .2 bottlings) and a 2007 Port Charlotte. Port Charlotte is Bruichladdich’s heavily peated range of whiskies, named after Loch Indaal distillery which was constructed on Islay in 1829, but mostly demolished in 2003. Bruichladdich matures its Port Charlotte whiskies at the original site as several of the buildings still remain intact, but distillation of the spirit takes place at the main Bruichladdich facility in Rhinns.

The Port Charlotte CC:01 was distilled in 2007 and is 8 years old. It is matured in French oak casks which previous held Eau de Vie from the Western Cognac region. Hence the ‘CC’ in the bottle name probably refers to ‘Cognac casks’. It is bottled at a hefty cask strength of 57.8% ABV.

Nose: Less peat than one might have expected, but still present and rather ashy and oil with that. A healthy dose of brine sea air alongside a bundle of herbal and vegetal notes. I get peeled and washed potatoes which is an interesting aroma to say the least. There are green leaves and some light but sharp citrus running through the heart of this dram. The addition of water brings out some farmyard notes and makes the peat more expansive.

Taste: An initial intense high strength bite. There’s considerably more peat on the palate than on the nose. Sweet candied peels lick at the tip of the tongue and alongside a continued salinity provide a very fresh arrival. The peat is earthy and dirty – rather engine oil and is enhanced greater with some water – this brings forward a lot more iodine, TCP and even some chamomile into a fairly medicinal packet of full peated goodness. The vegetal notes persist and again, with water become very farmyard. Cask influence is now upped a notch with some notes of ginger. Our citrus remains in play making for some fruity (and with the salinity), coastal quality.

Finish: Medium to long in length and rather dry. Ginger and salt persist alongside our ashy and medicinal peat.

The CC:01 is doesn’t taste like its only 8 year of age, it’s got a lot more complexity and depth going on. This, I’m sure, comes from the Cognac influence – it’s slightly jarring initially, but a decent application of water rounds many of these edges and re-balances a lot of flavours. I’ve tried a few Port Charlotte’s where the farmyard flavours underpin many of the others – this is no exception. Good stuff, though water feels like it’s an absolutely must here. I picked this up for around £70 on my travels, but it has now moved wider than airports, and can also be found in retailers such as Master of Malt.