Notions of nature and nurture 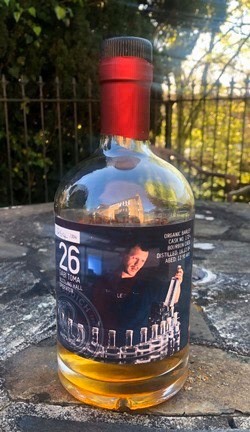 Whilst whisky enthusiasts lap up organic barley expressions as eagerly as any others – it’s far from certain that they’re doing so because of an inherent belief that they are somehow a better or more tasty product. Once upon a time all food and drink was organic. Agriculture was entirely dependent on Mother Nature – and a good crop was at the mercy of climate and nurture alone. There were no artificial additives or intensive farming methods with which to amplify yields. Whisky too at this time was fundamentally organic.

It was not until the 1940’s, that the farming industry’s growing reliance on both fertilisers and pesticides produced a revival of traditional production techniques and the early seeds of the organic industry. Traction was initially slow across many parts of the food industry – consumer education was poor and traditional producers (who were by now fully reliant on inorganic techniques) railed against the claims of organic producers that their produce was either more natural, or healthier. The wine industry in particular is one where organic production took nearly 40 years become truly embedded and valued on its own merits. But now, in some countries, and despite a myriad differing organic standards, organic wine growth has started to outpace the inorganic.

It has not been and still is not, plain sailing.

A 2009 meta-analysis found there was no nutritional difference between organic vs. non-organic foods – one of the first major modern studies. Subsequent studies found slightly higher levels of phosphorus and antioxidants and lower levels of cadmium. All notable things – but when explored more closely, the differences were far from spectacular. And when compared to the cost to the produce the crops – and ergo the onward cost of the product to the consumer – the differences at that point seemed next to miniscule.

Regardless of the continued exploration of the science behind organic and GM produce, people chose to purchase these products because it is their right to do so. But despite whisky enthusiasts continually criticising the use of additives and corrective processes in their whiskies – (E150a, chill-filtration etc) – I’m still thoroughly unconvinced that 99% of the whisky drinking world truly care about how their barley was grown. I’ve argued before that I do believe that both barley strains and terroir make a difference to the eventual flavour of whisky – indeed, I’d go further and suggest that every single part of the process of production can make discernible variances before the liquid has even hit the inside of a cask - despite the continued notion that wood is the great equaliser.

In some ways I understand the nonchalance towards raw ingredients – distilling is a particularly destructive process. But in others, I fail to see how the initial inputs to the process are deemed to have less impact than the end ones (casks). However, there’s a point where the line between nature and nurture becomes blurred to all but the most ardent of whisky geeks.

It doesn’t matter how many articles are penned in defence of either barley or geographic variances – people will largely still buy what they deem to be tasty, presented in a manner which personally appeals to them and is offered a price point that they feel comfortable with. The production of organic whisky is a costly, labour and time-intensive process – nature sadly doesn’t come cheaply nowadays.

This organically-focussed Bruichladdich was laid down in December of 2004 in a single ex-bourbon cask (#1724) and left to mature until around May 2017 (which is when I last visited the distillery funnily enough) when it was bottled as a Laddie Crew Valinich – in essence a distillery exclusive hand-fill adorned by a label which focuses on a Bruichladdich staff member. This Crew Valinich (number 26 in what is a difficult to collect series for folks not living on Islay – they’re up to at least 46 by now) looks at Gabi Toma – Bruichladdich’s bottling hall manager who hails from Barlad in Romania. Those interested in learning more on Gabi can check out Bruichladdich website.

The malt base for the release came from a mash consisting of organic barley – you’ll likely have already noted the exceptionally high ABV of 64.1%. Remember – not all distilleries stick to the common standard filling strength of 63.5% - Bruichladdich has filled its casks at distillation strength (between 71 – 71.5%) ever since its reopening. A point which will likely cause disagreements over the rate of maturation vis-à-vis alcoholic strength (and whether or not the 63.5% was simply arrived at to create uniformity in shared filling contracts)  – but at the very, it least builds in seven years of angels share over and above those who stick to the norm.

304 (50cl) bottles were produced – you’ll likely need to scour the auction sites if you’re looking for this one – I last spotted it in February on SWA for £90 (plus fees). Certainly more than the original Bruichladdich shop price, but not brutally so.

Taste: Unsurprisingly big and punchy – but with a rich, full and creamy quality. Commencing in a similar vein – sour cream, and cottage cheese – completely lactic – moving into overripe apples and apricots. The development brings in roasted malts and barley sugars, moving steadily towards Shredded Wheat and Frosties before emphasising hay and some changing room sweaty musk. And usual combination of freshness and sweetness playing off against sourness and perspiration. The addition of water takes the initial assault down to more manageable levels, bringing with it mustiness from cellars and peeling walls with drier, tannic oak and press orchard fruit juices.

Finish: Medium with sugar-sprinkled cereals and a fading pang of nutmeg.

A 12 year old organic Bruichladdich with more personality than many equivalently aged ex-bourbon cask expressions. The underlying Laddie distillate offers a highly characterful (if occasionally left-field) experience at this particularly high bottling strength. And whilst I was soon reaching for the water pipette to take some of the initial punch out of it – nevertheless there’s a charisma here that is unmistakably driven by the spirit and not by the wood.