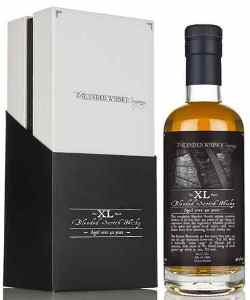 Blends are the oil that keeps the wheels of the whisky industry turning – responsible for more global sales than single malts several times over. But, that doesn’t mean that all blended whisky need be boring bottom shelf glass filler, and The Blended Whisky Company spends its time trying to prove that blended whisky can be greater than the sum of its parts.

The Blended Whisky Company is part of Atom Brands burgeoning booze empire – Master of Malt, Boutique-y, Ableforth’s etc – the Tonbridge Wells based company always seems to have something new going on. Previous Blended Whisky Company releases have made some waves - both their Golden Age and Half Century Blends have picked up gongs at the World Whisky Awards, and their Lost Distilleries Blends have focusses on some of Scotland’s most desirable, but now sadly defunct sites. After a seemingly quiet 2018 for the company, they’re now back with a new special release – The XL Blend.

Similarly to the company’s Golden Age blend, the XL is composed of malt and grain whiskies over 40 years of age. Xtra-large and XL-ent puns a plenty, but the name is actually derided from Roman numerals (50 minus 10). The whiskies within the blend are not specified, but whilst coming from across the whole of Scotland, have a strong focus on Speyside, with some really old grain, and plenty of sherry casks in the mix.

The first batch of the XL Blend was listed up for pre-order for £548.95 a bottle just before Christmas - presumably it found its way into several folks’ stockings as it is, as of writing, now indicated as coming soon on the Master of Malt website. Regardless, with a mere 1,000 bottles in this first batch, it’s one which isn’t going to hang around for long.

Nose: Initially rather placid and benefitting from some alone-time in the glass. Then, much more expressive and willing to shout about its well-aged credentials – heavily reduced fruits (apple, orange and raspberry) cooked down into a simmering preserve, alongside plenty of old wood –  dry, slightly bitter, with expected vanilla present and correct - and packed full of aromatic and earthy wood spices (ginger, nutmeg and saffron). Running throughout is a vein of sourness – part tart blueberries, part yeasty loaves and damp wallpaper. Resting brings out a strong nuttiness of hazel as well as emphasising earthy soils and dunnage floors. Reduction favours spicing, adding rye bread, chilli chocolate and gentle hints of peppery smoke. XL on the complexity here.

Taste: A rich, fulsome arrival delivers a basket of jams and marmalades (raspberry, orange and darker blackberry and blackcurrant fruits) – it also brings with it plenty of wood – old, but well-polished with a slight chariness. The mid-palate offers dark chocolate, liquorice, and coffee and walnut cake – all add weight and opulence. The development is steady, moving increasingly towards the grain elements, which are well integrated, but appear in the back-palate as toasted cereals and oatiness alongside straight up vanilla pods. Water softens things up with buttered pastries, freshly baked bread and a big injection of nuttiness.

The XL Blend has plenty to admire – it’s exceptionally well-composed, offering a coherent and complex whisky that marries discernible deep fruitiness with plenty of well-aged character. Only a last gasp deluge of wood tannins and oak bitterness keeps it from collecting a 90+ score. But, it’s still a delectable and delicious whisky that offers intricacy in return for patience. 40 or Xtra-large? Eitherway, feel free to supersize me.