Style and 50cl of substance 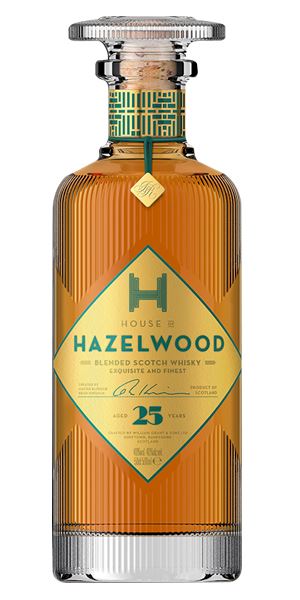 In 2015 William Grant & Sons launched the travel retail 'House of Hazelwood' series of blended whiskies. The three age-statement blends were inspired by the life of Grant family member Janet Sheed Roberts who lived in 'Hazelwood House', an art deco property close to Glenfiddich distillery. The bottles were designed to not only celebrate the life of Sheed Roberts, but also to hark back to the 1920's which was both a peak for Scotch drinking and the time when fashion and design entered the modern era.

All three expressions (18, 21 & 25 year olds) draw heavily from the same two distilleries: Lowlands grain distillery Girvan and Kininvie distillery located in Dufftown, Speyside. Today we'll be going right in at the top of the range, the 25 year old.

The House of Hazelwood 25 Year Old is presented in an arguably elegant 50cl decanter and takes its design queues from a melding of 1920's Shanghai and a smattering of stereotypical art deco stylings. It would be wrong to not mention the packaging in this summary – as well as being eye-catching, sophisticated and unfussy, it’s probably the best thing this whisky has going for it unfortunately.

Taste: Disappointingly thin mouthfeel. Vanilla (natch) in charge with some interesting coppery tang….almost like it’s fresh from a pot still. Garden notes of green leaves and grass mix with some farmyard hay and a light rancio.

Finish: Short, drying and not really emphasising any particularly flavour over another.

You can’t argue this isn’t drinkable and well balanced – but at the same time, it’s just incredibly dull. The extensive marketing text behind this bottle makes real play of it being ‘married in American oak’ – oh come on – however, what it’s really saying is that a lot of a first-fill casks have been used to pump enough vanillins into this whisky to at least make it good enough to bottle. However, at over £150 for 50cl and at 40% ABV I’ll let you judge for yourself whether that’s really good enough.