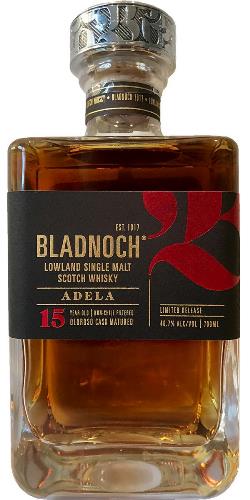 Finishing our week of distilleries who’s names start with the letter B (did any of you spot that?), we’re down to the Lowlands and Bladnoch. Australian yoghurt magnate (yes really) David Prior bought the distillery in 2015 and renovated the site which had been mothballed since 2009. To celebrate the reopening of the distillery, three new (old?) expressions of Bladnoch were released last year. We’ve already taken a look at the NAS Samsara on The Dramble. Bottle open, it’s now time to investigate the 15 year old Adela.

The three releases in the series (Samsara, Adela and Talia) were originally launched under the ‘Limited Release’ banner, but have all subsequently had a bit of a liquid makeover. Now, subtitled ‘Celebrating 200 Years’, Samsara lists Californian red wine on its label (tick, correct answer for me) and the 25 year old Talia appears to have an entirely different cask composition, moving from a new oak finish to a port pipe finish. I can only guess that following a raft of poor to so-so initial reviews that Bladnoch took it upon themselves to try to improve perceptions in advance of its presumed 2020 first new release proper.

Our 15 year old Adela is from the first ‘Limited’ batch and not the ‘Celebrating 200 Years’ - it has been composed by Master Distiller Ian MacMillan from a ‘selection of Bladnoch matured in ex-oloroso sherry butts – including both Spanish and American oak’, and is bottled at 46.7% ABV.

Nose: Fruity…and farty. Apricots, strawberry yoghurt and honey are joined by gruyere cheese, struck match and slight musty fart aroma. Fortunately, this mostly dissipates after a little time in the glass. Then, some underlying herbalness comes to the fore – lightly floral, slightly perfume – as well as a selection of more pleasant bakery notes – flan and tarts. The addition of water had little effect for me, if anything is brought out some brackishness. A really mixed bag of a nose that is not convincing.

Taste: Strong, peppery and bitter. Quite a big arrival which is fairly earthy and brings a heap of red berries, but also a lot of bitter oak. This is followed by a wall of pepperiness that is both punchy and somewhat overpowering. Water greatly improves things, just a few drops strips out the astringency and allows juicy red fruits, chocolate and raisins to shine through.

Finish: Medium, quite drying and bringing more than a scattering of ground black pepper.

Alas, Bladnoch 15 year Adela is a bit of a mess. Sulphur is immediate on a nose that can’t make up its mind whether its light and floral or heavy and sweet, and the palate 100% required modification to find a balance that is not bitter and over spiced. Nevertheless, there are some nice flavours going on here – it’s just a shame that the overall composition doesn’t allow them all to work in harmony at the same time. I’ve heard that the Celebrating 200 Years version of Adela is quite the improvement over this – and I hope to provide a comparison tasting at some point. But, in the meantime, my score here is only because with dilution the palate is brought to life and many of the jarring notes are tempered. Without water I’d probably score this several points lower.