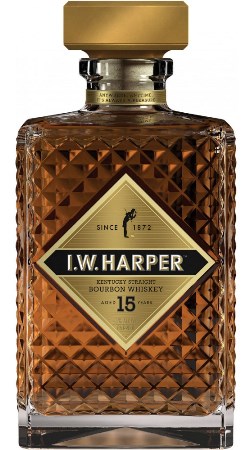 I.W. Harper is one of Bernheim’s slightly less well known bourbon brands. Launched in 1872 by Issac Woolf and Bernhard Bernheim the brand has switched owners several times over the past near 150 years – it’s currently held by Diageo. The current Louisville distillery was opened in 1992, but had previously been located in several different locations. The brand was largely absent from the US through the 90s and 00s (though still highly popular in other countries such as Japan), but returned in 2005 with an I.W. Harper NAS and 15 year old expressions.

There seems to be some confusion over the mash bill for I.W. Harper 15 year old with some sites/blogs stating that it’s very low rye (86% corn, 6% rye and 8% barley) and others indicating more slightly more usual recipe (73% corn, 18% rye, 9% barley) – though I think these could be assuming that 15 year old comes from the same recipe as the NAS bottling which may or may not be the case. Having tasted it, I’m more included to go with the 6% rye bill, but if any of you have the final word on this I’d love to hear to clarify.

Nose: Sweet and softly spiced. Stewed fruits (dark ones – blackcurrants, blackberries and cherries) merge with confectionery shop sweetness, brown sugars, and healthy dusting of cinnamon. There’s some underlying umami flavour here – sweetcorn and something slightly lactic – not creamy, sharp. There are hints of varnish out of the bottle which fade after a short rest in the glass.

Taste: Sweet again, but now with more prominent spicing coming through. Caramel and toffee covered apples are joined by some juicy dark berries and some big vanilla influence – part pod, part extract. Earthiness takes over from umami now and reminds me of barrel filled warehouses full of planking and very sappy wood and wood resins. Spicing is high with cinnamon, but still on the sweet side (a factor of the lower rye content I’d posit). In the background some natural herbal/vegetal notes of reeds, flax and dried grass.

Finish: Quite long, quite oaky and with some astringency starting to appear. Vanilla and cinnamon on show.

I.W. Harper 15 year old is a fairly relaxed bourbon with high sweetness and relatively gentle flavours – as such, it’s quite easy drinking. It shows a good translation from the nose to the mouth, but not necessarily one where you’d guess the slightly higher age statement. It does however have excellent balance of flavour and some impressive qualities at only 43% ABV. It’s somewhat tricky to find in the UK and Europe (and/or expensive too though the NAS and now a 12 year old are readily available), but in the US you’ll be able to pick this up more readily and at better prices. This said, there is much variance – I’ve seen this for around $99, but I paid closer to $45. Best to shop around.