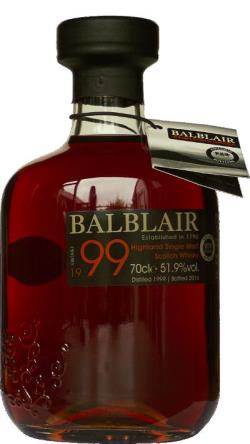 Today’s review is of a single cask Balblair that was bottled as an exclusive for the UK’s Whisky Exchange. It’s a whisky that I ended up trying several times over the course of last year – a hazard of hanging around with Exchange’s Billy Abbot too much I dare say – and one that I’ve been meaning to write proper tasting notes on for a while. Whilst it still comes in the snazzy Balblair glassware, this whisky doesn’t come with a colour that you’d expect to see within the distillery’s Vintage-based core range. It’s dark auburn, packed full of the colours of deep autumn. It’s screaming first-fill sherry cask.

The Balblair 1999 TWE Exclusive single cask  was priced with a fair premium - £125 (now sold out, though it lasted on Exchange’s website for quite some time). Official single cask 1st fill sherry Balblair’s aren’t an everyday sight for a distillery that tends to favour (rightly) ex-bourbon cask, and/or marriages/finishes with carefully judged oloroso. But, if memory serves correctly, Exchange sold a similar bottling for their 15th anniversary back in 2015 – and that one flew off their site. This 2016 follow-up release comes from a 1999 single sherry cask (#1712) and is bottled at 51.9%. Bombs away chaps.

Nose: Dripping with oloroso right from the get-go. All the expected deep sherry aromas present themselves richly – dates, figs, raisins, sultanas, chocolate and sticky toffee pudding (a proper one). There’s some aroma gradation here, especially after a period of resting – juicy oranges, toffee apples and polished leather. Nuttiness is high on the menu also – walnuts and almonds – and with the sweetness levels as high as they are, the almonds present rather akin to marzipan. Spicing is perceptible, but on the low down compared to the sherry aromas which grip this whisky like a vice – a touch of cinnamon at most. The addition of a little water heightens the nutty elements and adds a dash of balsamic vinegar.

Taste: Viscous, very full, and with an arrival that lets you know that Mr sherry is very much in charge here. Red fruits and berries now – raspberries and redcurrants – both heavily reduced down to syrups and jams. An assortment of dried fruits, fresher oranges, dark chocolate and leather translate across from the nose well. Nuttiness is reduced here, but balsamic takes more of a leading role offering some tartness that sits alongside a bigger cask influence – cinnamon and pepper and a slight touch of char. The spicing is quite welcome as the sherry influence here is almost cavernous, and as such rather saccharine – tingling spice adding just enough bitterness to bring some semblance of balance. A few drops of water lessens the sugar-rush, but also diminishes the spice too – the result is more perceptible woodiness.

Finish: Medium to long and still with all of the sherry – chocolate, raisins and spiced fruits – liquid Christmas cake.

This TWE 1999 Balblair is the very definition of a sherry bomb. If that’s up your alley then this offers a particularly tasty full-impact oloroso-fest. However, this whisky is almost entirely cask-led – the underlying Balblair spirit character has been beaten to a pulp by the sherry cask. The resulting liquid might therefore seems a touch strange to you if your experience of Balblair has focussed more on the traditional ex-bourbon house style of the distillery. There’s not a great deal of nuance here, but if you’re looking to open up the oloroso bomb bay doors, walk this way.