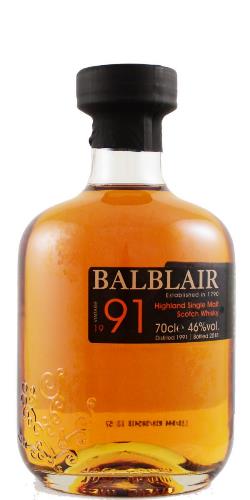 Those new to official Balblair expressions will need to take a closer look at the labels (a good practice anyhow) to learn exactly what’s going on inside the bottles. Balblair bottle by 'vintage', preferring, in their own words, to "select whiskies that have reached their exact point of optimum maturation". In essence this means that the distillery operates a ‘floating’ core range – there’s an array of similar expressions (a young ex-bourbon, a mid-aged marriage of casks, and an older more heavily sherried number etc), but they’re not precisely the same all the time. Variety is the spice of life. But, this can make things a little confusing, with very different whiskies bearing the same vintage year on the label – but look a little closer and all will make sense.

The distillery’s latest offering was unleashed at the start of 2018 – the 1991 3rd release. The 3rd  release of the 91’, doesn’t just mean another batch of the same juice that’s been released previously – the release number provides a verbal differentiation between each release, and also implies that their might be some different combinations of casks in play. The 1st release 91’ was bottled in 2009 at 18 years of age and drawn from ex- bourbon. The 2nd release was bottled in 2011 at 20 years of age and again drawn from ex-bourbon. This new third release clocks in at 27 years of age, but is composed of both ex-bourbon and 1st fill sherry butts. Essentially, it’s a replacement whisky for the very well regarded 90’ 2nd release bottling of which there’s not many bottles left out in the wild.

It’s a touch more expensive than the old 90’ (at around £120) but, time has moved on, and this new Balblair has a few more years of maturation under its belt. Likewise, when you consider the asking price that many distilleries put on their mid 20 year old OB’s, frankly the price is extremely reasonable. The whiskies used to create the 91’ 3rd release have been matured for 24 years in ex-bourbon – then, they’ve been re-racked into first fill European sherry butts for 3 years of finishing. The bottling is delivered at 46% and comes in Balblair’s appealing, but functional centre-opening boxes.

Taste: A syrupy arrival that has plenty of rich unctuousness around the mouth – the translation from nose to mouth is near perfect – so expect more of the same. A combination of reduced fruits – peach compote,  stewed apples, plum liqueur and raspberry coulis. These are supported by butterscotch, milk chocolate, digestive biscuits and gooey honey. Everything receives a spicy kick from both the ex-bourbon and ex-sherry influence – ginger, cinnamon and vanilla. The addition of water adds even more fruitiness (orange peels and pear juice) as well as emphasising some patisserie flavours – choux and rolled pastry.

Finish: Fair long, quite chocolate-driven and with some bitter spicing playing off against the sweeter flavours.

Balblair 1991 3rd release is an excellent auxiliary to the previous 90’ release, and as such it shares much in common. Fans of the previous release (me included) can continue their Balblair journey with this new bottling. There’s richness, but not too much sweetness. Spicing, but not to the point of astringency. The overall composition feels exceptionally well integrated and most importantly – it’s very tasty stuff indeed. An excellent expression at a very fair price. Well worth seeking out.