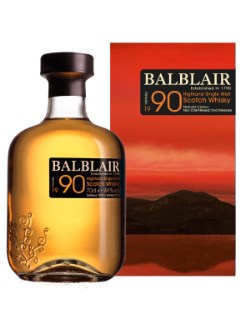 For those new to Balblair, you'll need to take a closer look at the bottle label (a good practice anyhow) to see the age of their malts. Balblair bottle by 'vintage', preferring, in their own words, to "select whiskies that have reached their exact point of optimum maturation". This can make things a little confusing, with very different whiskies bearing the same vintage year across the bottle.

The first 1990 vintage was released in 2009 as a travel retail bourbon cask bottling. We're going to take a deep dive into the well-regarded second release - a 2013 bottling which has spent 21 years in bourbon casks, and has been finished for a period of 2 additional years in Oloroso sherry. How would you know this was the 2013 rather than the 2009, well, you took a closer look at the label right? or you'd just taste it, because it's a VERY different beast altogether.

Nose: The sherry finish is quite evident here...there's a sweet-sour note mixing with some well-rounded toffee, fudge and vanilla. The age too is apparent with a strong tobacco coming through, almost burnt and smouldering tobacco.

Taste: Viscous, mouth filling and with Christmas cake written all over it. The wood spicing is strong here, with cask age adding notes of polish and leather, but raw oak adding cinnamon and nutmeg. Also pencil shavings. Hmmm. Yeah. I kinda like that. There's some light sweetness from the sherry cask which balances tremendously well with the more spicy and slightly austere notes of the bourbon cask basis for this whisky. But, don't think that this is overall a sweet dram. It's not.

I'd strongly recommend this dram for anyone interested in both expertly made whisky, and also 'interesting' sherry finishes. You'd think that using Oloroso sherry would lead to super sweetshop type affair. Not so the case here, and what marks this Balblair out is the clever balancing which overall works wonderfully well. Just the right level of, well, pretty much everything.