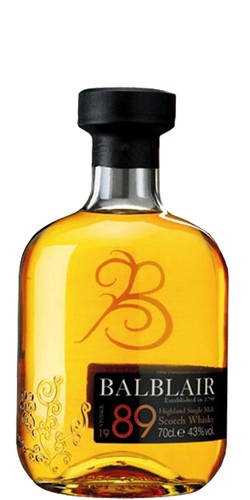 I’m always a little surprised that Balblair has not garnered more interest and popularity as a high quality single malt whisky. Founded in 1790 making it one of Scotland’s oldest, the distillery has been under the wings of Inver House since 1996. In 2007 a radical reimagining and redesign of Balblair moved to bottling by vintage year (rather than always having an X and Y year old permanently available) and snazzy new glassware was introduced across the range.

Since then, Balblair has expanded its visibility, into global travel retail, and has scooped a number of industry awards for their various expressions (Check out the 1990 Vintage 2nd release for one such well-deserving award winner). The distillery is one of the more pretty sites, and appeared in Ken Loach’s part hard-hitting street drama / part whisky stealing romp ‘The Angel’s Share’. But, you still don’t hear Balblair being talked about all that often in whisky circles.

I believe part of this comes from the vintage system – well regarded expressions have their time and place and then are archived, never to be released quite the same again. Personally, I love this about Balblair – time moves forward, and so does the distillery. But, it can be hard to build up a large fan base when there’s not one single expression always available that people can pin their colours too. But, the other part of this is that Balblair are fairly humble in their successes. They don’t shout the loudest and make the biggest ripples in the pond – they just keep on quietly making high quality whisky, and you know what, I’ll take that too. It’s great to have a distillery that you love where releases don’t fly off the shelves in the first 60 seconds. So Balblair being relatively quiet and not chattered about all the time suits me just fine!

For today’s tasting we’re going to go back to 2007 and look at one of the very first bottles released under the rebrand/redesign. The 1989 Vintage 1st Release. This Balblair has been ex-Bourbon cask matured for around 18 years when it was bottled in 2007. It comes in at 43% ABV (I believe all non-single cask Balblair’s have been upped to 46% in the years since).

Taste: Fruity with deeper inflections. Juicy fruits still dominate, with apples, pears and now some pineapple, but they’re bolstered by some real underlying maltiness and interesting light salinity. Golden syrup takes over from honey in providing saccharine sweetness and  now cask influences comes out to play with some hits of pepperiness.

Finish: Medium long, still quite fruity and with a peppery kick in the tail.

Balblair 1989 Vintage 1st Release is crisp, fresh and lively. The distillery’s spirit character is, to my taste, particularly well-suited to this type of ex-Bourbon barrel maturation – revealing bucket loads of juicy fruitiness, whilst always keeping the cask influence well in check. A great example of Balblair’s inherent quality.

Quite hard to find this 1st release now seeing as it was bottled a decade ago. You will still see the 2nd and 3rd releases available for purchase, but do take care – whilst probably equally as good, they are not simply a reissue of this expression. Each 2nd and/or 3rd release from Balblair takes spirit from the same year of distillation, but from a different bottling year. So whilst they’re going to be similar in character, they’re not going to be identical. All the information is helpfully printed on the boxes and bottles for you, so just take a few moments and remember your Vintages!