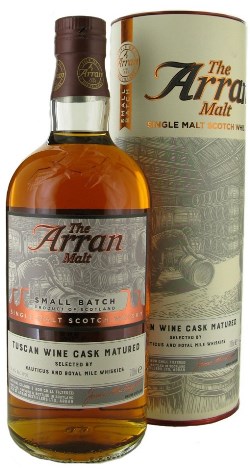 This month, a new Royal Mile Whiskies exclusive Arran has been launched in partnership with Leith-based bar Nauticus which opened in September 2018, occupying the location of the former Parlour Pub on Duke Street. Nauticus has been established to champion home-grown produce (90% of the menu is either Scottish made, or Scottish owned) and local spirits – but, the bar also looks to draw on the heritage of Leith as a key trading port from as far back as the early 14th Century.

Commencing with wool (which was the purview of the eastern coastal town of North Berwick until Edward I massacred the local population in 1296), the town expanded its trading routes throughout the Middle Ages, exporting cattle, salmon and salted fish and importing spices, sugars and wine from Continental Europe. This limited edition bottle looks to channel Leith's trading past by taking Scottish produced Arran Malt and maturing it in red wine.

Arran is far from a stranger to wine cask maturation – back in July The Dramble reviewed a dozen different wine finishes from the distillery. This new Arran vs. wine expression is however a little different to many that the distillery releases directly – the maturation is full-term, not a finish. The distillate comes from 2008, spending 10 years in French oak ‘Tuscan Wine Casks’ before being bottled at 58.6% ABV. The Tuscan wine in question is Sassicaia – a sought-after Tuscan red wine that was first released in 1968 (and regarded as the first ‘Super Tuscan’). It’s made from the Cabernet Sauvignon grape and comes from the only single wine estate in Italy that has gained its own DOC (in 1994). 900 bottles (the result of three casks) have been produced and are (as of writing) available directly from RMW at £64.95.

Nose: Immediate red wine influence. Blackcurrants, blackberries, cranberries and cherries provide a compact but intense fruity parcel that sits alongside musty tobacco box, malt loaf and plenty of peppy spicing – clove, anise and cinnamon. Taken as a whole, it forms a particularly festive mulled wine. Alongside, dusty old biscuits, aromatic wood and some interesting herbals – rose (Turkish Delight) and verbena. Reduction takes things down a notch – lessening the intensity, but allowing some of the natural sugary aromas room to shine – candyfloss and toffee – with nettle and musky earthiness supporting.

Taste: A high impact arrival that managed to be both fresh, but also deep. There’s plenty of clingy syrupiness here, but a surprisingly low level of tannins. Spice and fruit is the order of the day – blackcurrants (Ribena almost), blackberries and heavily reduced red berries are livened with pepper, liquorice (Black Jack chews), rose hips, clove, primrose and verbena. There’s excellent structure here which allows for both a sustained development, as well as precise flavours. The addition of water adds orange peels and brightens the top end flavours (more sugars, less prickly spice), as well as adding some dusty cask flavours into the mid to back palate.

Nauticus and RMW have picked some cracking Arran casks for this collab limited edition. The French oak casks are in total harmony with the gentle spiciness of the Arran spirit and the wine influence itself is both integrated, as well as bright, fresh and defined. There are two common dangers with wine cask maturation – the spirit being lost in the precursor liquid, or the wood running amok with associated overabundance of tannins. This expression sidesteps both of these, presenting something that is as delicious as it is accomplished. Delightful.