Pick it, pack it, fire it up, come along 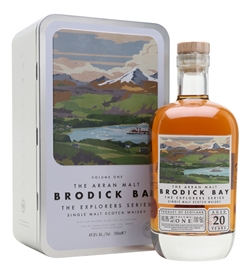 Despite exclamations to the contrary, packaging plays a more important role in consumer purchasing decisions than you might think. Regardless of a vocal minority who would ideally see all whisky produced in homogenised clear glass bottles without any use of extraneous cardboard or wood (and honestly with prices heading the way they are, sometimes I feel like joining this brigade), packaging can communicate many things. From differentiating your brand identity, to standing out on shelves and swaying customer purchasing decisions….or even just adding some beautification to the growing number of closed bottle ‘whisky shrines’ that social media seems riddled with.

Whisky packaging is changing. Whilst there’s a growing trend for blatant ostentation at the upper end of the market, the shifting consumer demographic across the entire industry has led to a progressive development in the packaging department. Bolder colours, bolder shapes, unusual fonts and a growing use of non-traditional materials. Part of this plays into the overall marketing strategy for producers – a visual (and sometimes status-based) declaration of their brand values and market proposition.

But, all too often I see this batted this away with cries of profiteering – a flamboyant presentation which costs X produce, but is charged to the consumer at an increased Y price – ergo more profit. However, whilst this undoubtedly is true (business will leverage anything right?), times are a changin’. Unboxing is a growing phenomenon – I’ve read that it would take over seven years to watch every single YouTube unboxing video. Not all that long ago I saw an Instagram post of a whisky shine – where the owner (acolyte?) was proudly polishing his wooden HP longboat. Mind-boggling, but a mistake to just dismiss.

Arran are no strangers to playing the packaging game. The fairly desirable Smuggler’s Series presented folks with a trilogy of bottles hidden inside oversized hardback books – complete with fabric page markers. Rather imaginative and certainly eye catching – whereas the three bottlings themselves came delivered in a style that harked back to a bygone era – faded labels and all. Arran’s Explorers Series seems like the follow-up. Gone are books, in are aluminium tins. Not nearly as innovative, but adorned with appealing, slightly modernist recreations of scenes from around the Isle. Whereas the Smuggler’s Series called to the past, the Explorers has a focus which seems firmly on the future.

Volume 1 - Brodick Bay is composed of a marriage of ex-bourbon barrels and ex-sherry hogsheads that have been finished in oloroso sherry butts. Whilst the length of finishing is not specified, the bottling does pleasingly possess a 20 year old age statement – something of a new development for Arran’s fancy packaged limited editions. 9,000 bottles were produced at an ABV of 49.8%. The retail cost at release was a fairly stiff £130 (I’m not sure you’ll find any at this price, but I did spot one of the better UK outlets offering it £155). That said, unlike many limited edition expressions, the secondary market is actually your friend should you wish to obtain one of these. The price of Brodick Bay at auction seems to have settled around the £90 mark – which, once you add fees and postage still represents a sizable reduction in cost over the initial RRP. Perhaps unexpected and no doubt disappointing to the growing army of limited edition flippers.

Nose: It’s primarily the sherry casks doing the talking here – and they’re feeling fairly vocal. Seville orange marmalade is accompanied by plenty of gingernut biscuits, a healthy scattering of hedgerow berries, leather chair covers and a dusty mahogany table. Development in the glass is evident – the fruit ensemble broadening to include citrus and apricots whilst cinnamon and ginger spices dance on a bed of vanilla cream and salted peanuts. Dilution makes things spongey – Bundt cake, stollen, pancake mix and a helping of custard cream biscuits.

Taste: The arrival offers an intense burst of oloroso-forward tangy sweetness – sugars and spiced intermixed into a piquant bomb which explodes across the tongue. The palate development is more nuanced and progressive – creamy vanilla, toffee sauce and dark chocolate alongside dried fruits (raisins and dehumidified raspberries) and dry hazel nuttiness. Arran spice is never far away, and emphasised here by the cask composition – cinnamon, ginger and white pepper comes in like a roiling wave – big and forceful, but quickly withdrawing back out to sea. The back-palate offers more explicitly oak-driven flavours – old, slightly polished and dusty. Reduction introduces plenty of creaminess, but as a consequence quickly reduces the efficacy of both the sweetness and the spice – the result is more even, but less stimulating.

The first volume in Explorers Series offers a rich and full-bodied account of where Arran has got to after 20 years of production. For a long time I’ve thought of the spirit as incredibly versatile – equally at home in either ex-bourbon or ex-sherry, but always with a spicy core that defines the character of the distillery’s malts. Here that assertion is certainly still true – though it’s the oloroso casks that are firmly in charge of proceedings. Brodick Bay offers a marriage of opulent sweetness with piquant spiciness –  and I find the result quite delicious. But, make no mistake, at the RRP you’re certainly paying over the odds for a colourful screen-printed tin box – those who like their sherry with a firm spicy kick would do well to watch the secondary market for this bottling – at the price it seems to have settled at, it’s certainly more recommendable.