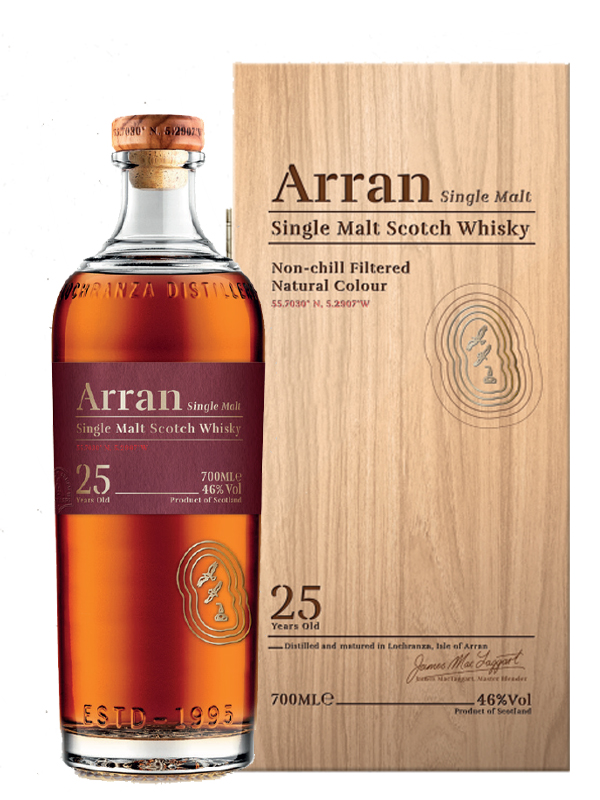 There’s a wealth of occasions, moments and milestones which distilleries can (and probably should) celebrate. From breaking ground on a new site and the filling of cask #1 all the way to celebrating a 200th birthday and everything in-between. But the achievements from the earlier parts of a distillery’s journey – the ‘first ofs’ - are in many ways the most significant of a lifetime. A centennial or even bicentennial is of course a remarkable achievement, but it’s a poor relation to the whisky being made and enjoyed right now. The times have moved on many times since. 25 years though – that’s a landmark that I can actually relate to - both personally, and also in liquid terms.

Hundreds of years of distilling heritage is far from nothing. The distilleries established at the end of the 18th and beginning of the 19th centuries instituted the foundations on which the wider whisky industry have been built. They set the path for the days gone by that we have already experienced and those that we will continue to enjoy in the future. Their journeys have and still do inspire those who came after. And they continue to stand as monuments to the longevity, creativity and the ever-broadening appeal of whisky. This relevance should always be remembered and celebrated – perhaps not quite as much as it sometimes is (and never as a bonfire for modernity) - but nevertheless, for a drink which is always a product of the past, history is astonishingly fundamental for whisky’s future.

However, once a distillery gets to being considered ‘heritage’ or an old-timer, the number of milestones it has to celebrate are arguably fewer. The significant birthdays have been had or are now an even longer interval away. The new ‘this’ and the new ‘that’ have often already been done before. And similarly, these occasions are, through necessity, only able to be tenuously linked to the liquid itself. They’re never accompanied by a 100, 150, 200 year old whisky - those have sadly all long since evaporated.

When it comes to celebrations which would prove to be a fire hazard of a candle lighting, the personnel working at the distillery and even its parent company are the onward guardians of a much longer-term endeavour which commenced many years before their birth. If they bear any relation, it’s through a father, grandfather or even great grandfather. The founders, managers, blenders and workers who first blazed a trail are long departed…but hopefully well remembered.

At the other end of this timeline are the ‘newer’ distilleries – those that were founded within our lifetimes. For these companies, the prospect of a 100 year birthday is not even a glimmer of a thought – most of us alive today will not live long enough to witness this particular moment in time. But, whilst these elderly aspirational milestones are too far away to practically contemplate, there are nevertheless a glut of moments, achievements and ambitions that exist within the earlier life of a distillery. And these can be linked to both the spirit produced at the distillery’s inception and to the people who shaped and influenced the site’s establishment and development.

Founded in 1994, Arran Distillery cannot nowadays be considered as a one of the ‘newer’ distilleries. Following several years of little to no openings, Scotland (and indeed the wider whisky world) is now seeing something of an explosion of distillery establishing. There’s a lot of them. And there’s going to be a lot of 5 and 10 year birthdays coming up. Nevertheless, when compared to many of its Scottish cousins, Arran still has significant milestones to come – and they will be celebrated with some of the staff who worked at the site in the mid to late 90s and are still with us to share their memories and journeys.

This direct link to the remembered past offers a relevance that distilleries established hundreds of years prior cannot realise in the same ways. Many Arran enthusiasts present for the founding of the distillery are still with us today as the distillery celebrates the release of its first 25 year old whisky – and they’re joined by many new drinkers and fans (myself included) who have hopped on throughout the course of this journey. And in understanding and exploring this currently liquid ‘living memory’, the context of the distillery, and its whisky becomes much easier to comprehend. There are no real questions (yet) around “what was Arran's spirit like in the past?” That past is still just about close enough to be considered as the present - at least in distillery terms.

The release of a 25 year old whisky is an accomplishment that all of the (real) newer established distilleries have quite some time to look forward to – likely in my lifetime – but by a point where I’ll have hopefully hung up my writing boots and will be looking forward to a well earned retirement. Perhaps future generations will see the advent of a quarter of a century of distilling realised in their lives with less enthusiasm – an occurrence which at that point comes around with a much greater frequency. But for my whisky journey, which started shortly after the foundation of Arran, its 25 year anniversary as presented in liquid form is a true moment in distilling history. Days gone by – but days I can still remember.

Arran’s landmark 25 year old release is part of the distillery’s core range, but similarly to many distilleries (and increasingly so with the consumer demands we can see at present) is a batched annual release. This first edition was unveiled at the tail end of 2020 and consisted of 3,000 bottles delivered at 46%. The composition is noted as 35% ex-sherry casks and 65% ex-bourbon casks – all of which were re-casked into 1st fill and refill sherry hogsheads for 1 year prior to bottling. For a much younger whisky you’d be looking at around 10-12 casks to produce this number of bottles. But for a whisky of 25 years of age, an angels share of 40% would be far from uncommon. So, the dig into the inventory would be deeper – you can likely double the number the casks required to create this expression.

The RRP of this release was £295. A substantial, but not unexpected, increase in price over the distillery’s exceedingly reasonable 18 (£85) and 21 year old (£120) expressions. Those moaning about this would do well to look at some other distilleries 25 year old offerings – Highland Park now at £400, Balblair at a highly fanciful £500, Ardbeg clocking in at £700 (who cares, the Ardbeggians will pay any price) and Glenturret at a genuinely WTF £950 etc. Whilst of course there’s always the likes of Glenfarclas 25 year old with which to suggest that all whiskies can be ‘reasonably’ priced, overall inventory levels and the current buoyance of the market suggest otherwise. This new Arran 25 year old is an expensive whisky – and it was never going to keep with the distillery’s incremental pricing programme and thus be offered at £150.

Taste: Bright, fresh and still fruit concentrating. Red berries – newly picked, jammed and preserved – are livened by vein of citric freshness. Plump sultanas and figs are joined by gingerbread biscuits before a transition to nutty sherry with walnut bread alongside white pepper. Reduction is not required at 46%, but is still offers variances on the theme – wild berries with a more ‘hedgerow’ quality together with cinnamon rolls and a bite of soured apple.

Finish: Lengthy and presenting more of the expected Arran spice. Cinnamon and ginger tingle, but never prickle and feel dialled down and restrained by tempered milk chocolate.

The first batch of Arran 25 year old is a composition that takes an expected distillate profile and toys with the structure and edges to craft something which feels elegant and at the same time dainty. Fruits are to the fore, whilst the typical Arran spice is both to the back and soothed down in to more of a support than a lead. The entirety presents as well integrated and eminently quaffable, with the oak influence completely in check. I’d loved to have found some ‘polished’ character amongst the bright fruitiness of this whisky – especially after a quarter of a Century of maturation – but that’s a minor quibble – very tasty indeed.