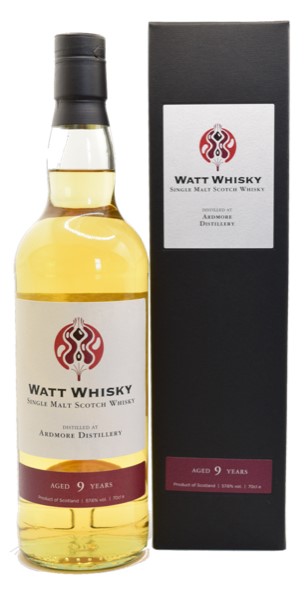 Dramble favourite Ardmore gets the Watt Whisky treatment with this 2011 9 year old single malt matured in an ex-bourbon barrel. You can find this at The Whisky Exchange for £71.95.

Nose: Burning forests, pine needles and lemon floor cleaner are joined by an assortment of clays and putties. Potting shed roofing and Wellington boots sit with waxed jackets whilst herbalness from sage is tempered by both metholated oak and touches of Philadelphia cream cheese. Water adds sweetness at the expense of some of the more vegetal notes. It also reveals a lemon meringue pie (served under a smoked cloche).

Taste: The arrival is sharp and citric – combining pine, fir and antiseptic with crystalline lemon. Nougat offers creaminess whilst fireplace ash runs throughout and is set against spent coffee and moist earthiness. Reduction once again adds a sweeter character with the lemon pushed upfront and the peat smoke shoved to the back. An interesting transposition.

Finish: Quite long and all on ash, lemon and earthiness.

A fairly singular Ardmore that drinks well for its ABV, possesses plenty of spirit character and never outstays its welcome. Likable stuff for those who seek out the Highland peated style - I.E. me.