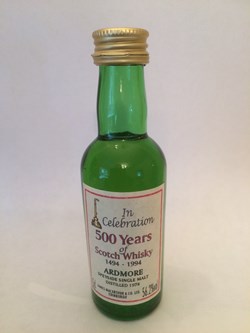 In 1994, James MacArthur released a series of 45 whiskies under branded  ‘In celebration of 500 years of Scotch Whisky  1494 – 1994 (1494 being the earliest recorded mention of whisky in the Exchequer Rolls of King James IV). The series consisted of 10 full sized (70cl) bottlings, and 35 (50cl) miniatures from an extensive variety of both distilleries and vintage years. Three whiskies from Ardmore were included in the series – one from 1976, 77 and 78. The 78 entry bears no age statement, though given the bottling year, one could posit that it should be between 15 and 16 years of age. It’s bottled at 56.2% ABV.

Nose: Resinous and mineral – a strange but intriguing combination. Pine and tree sap and joined by wet leaves, damp soils and moist earthy and vegetal aromas – mid way between fresh rainwater and stagnant ponds. These forest-like notes are supported by smoky minerality – wet limestone, hewn granite and aspirin. The peat here is initially rather background – coal dust and slightly smoked fish alongside lemon drizzled oysters. It’s joined by an underlying meatiness – cooking fats and heavily reduced beef gravy. The addition of water is transformative – now the peat is unleashed – still mineral and inland, but much more pronounced and bituminous. Nuttiness is also introduced – both hazel and almonds. These add sweetness and roundness and pair well with the overall steeliness of the nose.

Taste: A high impact arrival of tart citrus, shoe polish and plenty of wood resin and sap. In the mid-palate, a similar profile (grapefruit and mastic) , but deepened with intense earthiness – mud, clay and dunnage floors. Peating is much more prevalent in the mouth – mineral and chalky with horseradish and a sense of alliaceousness. The back-palate brings cask influence – old dried planking and plenty of increasingly bitter pepper. Reduction beings all these flavours together much more cohesively, reducing the prickle of pepper and amplifying the smoke in to an oily, dirty, vegetal peat.

This Ardmore is rather left-field, but for the most part, it works very nicely. The inherent sweetness and citrus levels here are what bind the dram together – keeping the powerful earthiness and green vegetation aromas and flavours just on the right side. Dilution, whilst not 100% necessary certainly offers benefit here – reducing the prickle of spice and wood and allowing the underlying peaty Ardmore profile more space to express itself. Certainly an odd one, but it works for me.