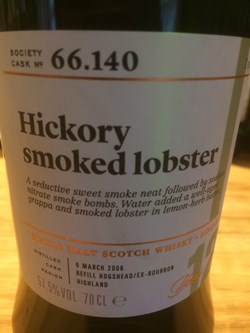 Taste: Green label – green flavours – bracken, ferns, tobacco and leaf mulch. Hay lofts once more – getting close to silage now – certainly fish tanks. The mid-palate offers coal ash and sharp crisp minerality of pebble beaches, whilst bringing some sharp citrus in the form of lemon oils. The addition of water brings out the sweeter side detected on the nose – seafood – not lobster for me, more pan-fried scallop.

Quite typically Ardmore in style with plenty of discernible foresty and farmy details alongside mineral lemon influences. Very solid.