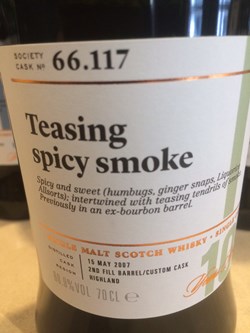 This Ardmore spent 9 years in ex-bourbon before being re-racked in a 2nd fill heavily charred barrel. Lightly Peated profile.

Nose: Sweetness, smoke and meatiness – often a combination for success to my particular tastes. Ginger nut biscuits to start, with some toffee for additional sweetness – then we’re going deeper with tar, rubber, camphor and earthy smoke – smouldering soils. Tobacco takes its place – burnt, aromatic and still wisping gentle smoke plumes into the air. Throughout is real meatiness – serrano ham, crispy bacon and heavily reduced gravy. The addition of water really brings out the natural sugars – burnt toffee, caramel taken too far and a touch of sugarcane molasses.

Taste: A full-bodies arrival of soft sweet and sour fruits. Toffee and liquorice up the sugar ante a level, before sending us on a spiralling journey into a smokehouse – BBQ’d ribs, seared steaks and a 24 hour brisket and joined by earthy smoke with hints of tar and bitumen. Water reduces the prominent meaty flavours, instead upping the sweetness levels. It also transforms the peat, from inland and earthy to airborne, ashy and chalky.

This Ardmore is particularly moreish. It is perhaps more intensely smoky than many OBs, but likewise brings with it defined meatiness and reduced sugars. All of these things balance together wonderfully. That said, whilst water may be employed to lower the punchy ABV of 60.9%, at that point it loses some coherence, turning ashy and chalky with much lower overall definition. It’s well worth trying this at its natural strength – indeed, to my taste it has been bottled at exactly the right time. The Dramble’s pick of the month for this outturn.