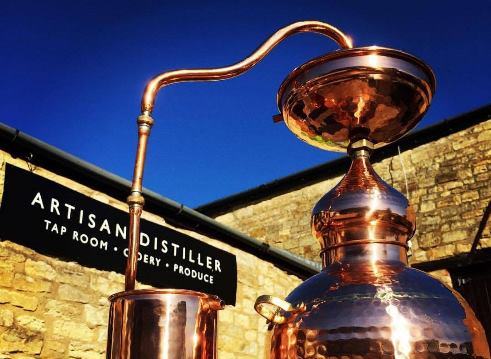 English distilleries has risen by 413% in the last 6 years alone. Driven by increased interest in spirits, craft beverages and, of course, cocktails, there are now over 14 distilleries in England producing single malt whisky and countless more producing gin, brandy and other spirits. You’ve probably heard of some of them – but The Dramble had the opportunity to visit one of, if not England’s smallest distillery operation – Northamptonshire's Wharf Distillery.

Owned by Laurence Conisbee, Wharf’s history doesn’t deride from Scotch or Bourbon – indeed, its origins lie in something England has plenty of – apples.

Back in 2009, Conisbee, a trained cartographer who was working in IT started collecting apples from both his back garden, and then subsequently from around old orchards scattered across Buckinghamshire. His initial aim, like many who have ventured into the variable world of home-brew was to produce home-made alcohol – in this instance traditional cider. The results of his apple scavenging quickly grew – beyond even his initial expectations. What started as a hobby for family consumption quickly turned into a cottage industry – Virtual Orchard was born. In 2010, Virtual Orchard was awarded a Gold Medal Champion Cider of Great Britain – and Conisbee left the world of IT to produce cider full-time. 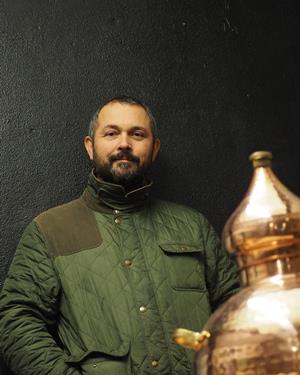 Demand for Virtual Orchard cider grew steadily, and at the same time, Conisbee took the opportunity to diversify, taking his cider and starting to produce apple brandy with the assistance of a small local business that possessed a still. Captivated by distilling it was not long before Conisbee purchased his own alembic still (nicknamed ‘Velocity’) with the assistance of EU grant funding. Only 300 litres in size, Velocity is relatively tiny in comparison to the stills you’ll find at many commercial distilleries. The brass soldered copper pot is fitted with a small downward angled swan neck which terminates in water cooled condensing recipient – think of it as a tiny worm tub. The alembic style is highly traditional, having been used for centuries to produce eau-de-vie, liqueurs and even in some countries oils and perfumes.

Conisbee’s 300 litre Alembic is both speedy, (given its relatively small size) and also efficient, able to yield around 20 litres of 80-85% spirit in around 10 hours time. Its uses have proved quite diverse – as well as apple Brandy, Conisbee has produced vodka, limoncello, plum brandy and, fairly recently, single malt whisky. In 2015, Velocity was put to work in a collaborative effort with local brewery Concrete Cow. Taking the initial mash and wash from the brewery, the still was employed to create a malt distillate which Conisbee has laid down in an ex-madeira cask. Cattle Creep Whisky was born. 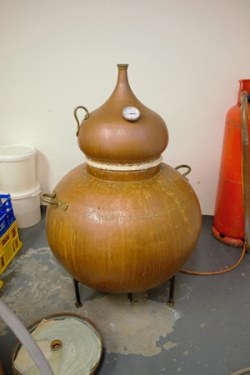 Cattle Creep will become whisky (after three years of oak aging) on the 1st November 2018. It’ll be one of England’s smallest ever runs of single malt – yielding just 50 bottles of 40% ABV single malt whisky, and 20-30 ‘distiller’s cut’ expressions bottled at a higher ABV. With another 38 or so weeks left of maturation there’s still an opportunity to purchase one of these unique bottles: http://wharfdistillery.co.uk/cattle-creep-whisky/

At the start of 2017 Virtual Orchard upped sticks and moved to new facilities, housed in an farm shop just north of Milton Keynes. The Virtual Orchard brand was retired and Wharf Distillery was born. Now, with larger facilities, and two new alembic stills on order, Conisbee is eyeing up increased production -  but still very much sticking to the micro distillery craft recipe that’s proven so successful over the past few years. Working in partnership with local cider makers and breweries, Wharf’s increased capacity will allow it to produce a wider range of spirits (English rum being very much on the cards soon) as well as solidify its move from a cider maker into one of England’s smallest distilleries.

It’s an exciting time for both English distilling and also for Wharf. The growth of small batch spirits continues unabated, and whilst we watch and wait to see where the future of English distilling might take us, we have Cattle Creep Whisky’s first ever release to look forward to later in 2018. 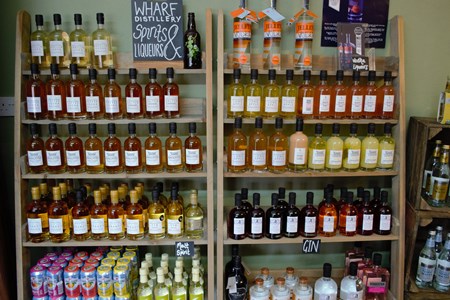