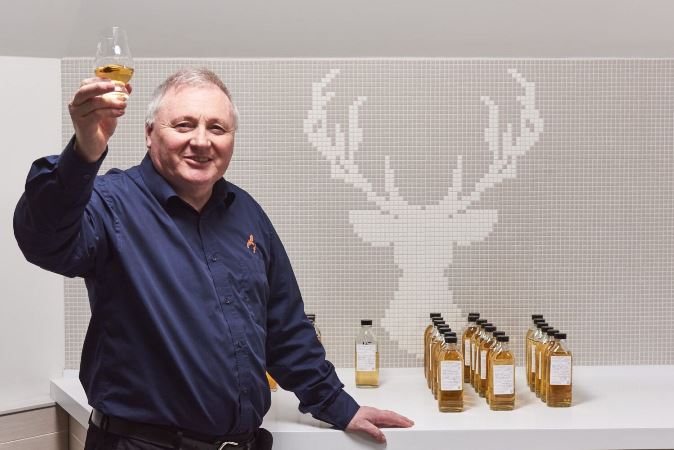 Isle of Arran Distillery are in a bit of a party mood this month. Master Distillery James MacTaggart has been with Arran for 10 years, and to celebrate this milestone, a new limited edition ‘James MacTaggart Anniversary Single Malt’ bottling is being released later this month. Originally from Islay, MacTaggart started his career at Strathclyde Regional Council in Bowmore. In 1975 he was asked by the then Manager of Bowmore (Harry Cockburn) to help in the distillery office whilst they installed a new computer system – whilst the computers never happened (back in 1975 they would presumably have taken up the whole office!), MacTaggart still found a role – working in the Bowmore warehouses and maltbarns.

Fast forward to 2017 and MacTaggart is now celebrating 10 years at Arran, and an impressive 40 years working within the whisky industry. Arran are rightly celebrating this achievement with the release of a 10 year old whisky which is drawn from some of the ex-Bourbon barrels filled during his first few months working at the distillery. We’ll be writing up some tasting notes on the ‘James MacTaggart Anniversary Single Malt’ edition for tomorrow’s post, but in the meantime, do join the #10dramgoodyears Twitter event being held tonight (at 7pm) where Arran alongside The Dramble and other whisky websites will be celebrating ourselves with the new upcoming bottling.

We caught up with MacTaggart last week to find out more about his career, favourite whisky moments, developments over at Lagg and, of course, the creation of the commemorative bottling.


What were you doing before you became Master Distiller at Arran?

I have worked in the whisky industry for over 40 years having spent 31 years at Bowmore Distillery on Islay before I moved to Arran as Distillery Manager in 2007.


What does a ‘normal’ day look like at Arran – and what is your favourite aspect of your job?

As well as being Distillery Manager, I am also Production Director and I am responsible for ensuring that all our processes run smoothly in the day to day work of our team. I enjoy all aspects of my work but I would have to say that production and maturation has always been my favourite, but I also immensely enjoy blending the various casks together to make up our special releases.


You’ve worked in the industry for 40 years – what has changed in this time?

In my 40 years in the whisky industry I have seen many changes, nearly all for the better and long may this continue. Traceability has been made easier by new technology which makes it easier to track the process from barley to bottle.  At the time when I started in the industry unfortunately quantity in production was more important than quality but that has now completely turned on its head and the No.1 factor is quality both in production and wood policy. 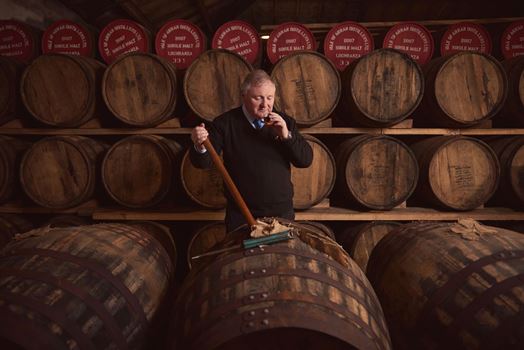 This is completely not related to the whisky industry but I was always interested in sports so either a coach or physical education teacher.


How would you describe Arran’s house style of whisky?

Citrus, sweet oak and a touch of spice.


Which whisky are you most proud of and why?

In our core range, I would say that I am proud of our 14 year old, as I feel that it is an excellent quality, honest dram which always stands up well in tastings and I feel it is a whisky cabinet/back bar staple.


Could you tell us some more about the Master of Distilling bottling? The casks were filled when you first joined Arran – how does it make you feel now seeing those bottled up for this celebration?

I am delighted with our new release which has been produced especially to mark my 10 year anniversary, especially as it focuses 100% on the Bourbon Barrel which I have always felt compliments the character of our whisky very well. I have enjoyed watching the growth of our distillery over the past ten years and it feels great to be a part of that. Selecting those casks was a personal project for me and I am looking forward to finding out what our Arran drinkers think about it! 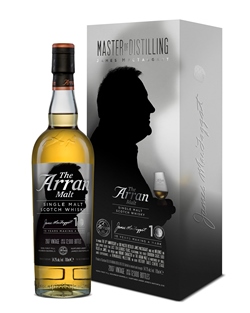 How are plans going for the new distillery at Lagg?

The building work at Lagg, on the south side of the island, is going well. The first stage in the construction plans is complete, and we have three new warehouses. The second stage which will involve the building of the distillery will start in early 2018. At the new Lagg Distillery we will produced a completely separate single malt to the Arran Malt which is produced at our Lochranza Distillery. The new distillery will concentrate on a heavily peated malt spirit at 50ppm phenol level and will be packaged and presented as a separate brand. The design for the new stills have not yet been completed, but will be in line with industry shapes for producing a heavily peated malt. The capacity of the wash still will be 10,000 litres as compared to the Lochranza wash still at 6,500 litres.


What do you see as the most significant developments in whisky that we’ll see over the next few years?

Many new consumers have been brought to the whisky category by rise in awareness of spirits such as gin and rum. This can only be a good thing for whisky - I think that as palates continue to seek out interesting and quality spirits, there will always be an audience for whisky. I do feel that it has more longevity and diversity than a lot of the other trend-led spirits out there. I would like to see whisky becoming more accessible to a younger audience, and to encourage more and more young people to consider the industry as an interesting career path.


If you could only take one bottle of whisky to a desert island, which would it be?

I would take a bottle of our 14 year-old, or perhaps a little sample of a lovely ex-Champagne cask matured Arran Single Malt which we have currently got maturing in our warehouses right now – it is very special indeed!

With thanks to James MacTaggart and the Isle of Arran Distillery team.