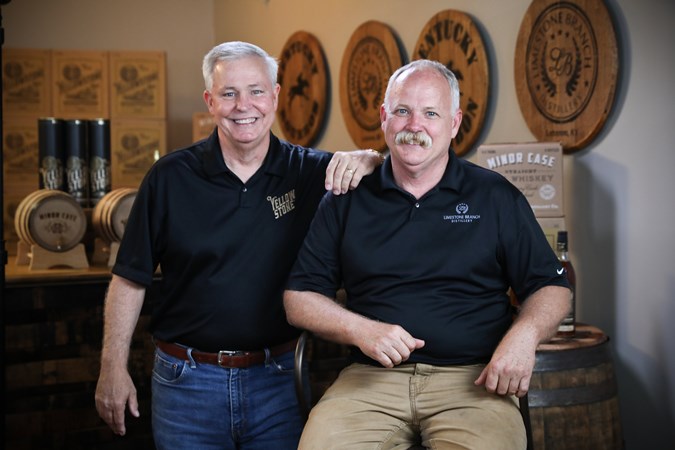 Steve Beam has a look of joyful bewilderment across this his face. He’s exhibiting for the first time at the London Whisky Show – and interest in Limestone Branch Distillery is exceptionally high. The stand is a bustle of visitors – some seasoned whiskey drinkers, others intrepid explorers – but all of them seem delighted to be able to ‘meet the maker’ whilst sampling his products. Conversing with one visitor to the next, it’s a testament to Beams’ passion for American whiskey that after three-long days, his enthusiasm and warmth for each new person remains undiminished. Limestone Branch Distillery is riding the wave of growing interest in bourbon and rye whiskies and now firmly targeting the UK market.

Limestone Branch Distillery was founded in 2011 by Steve Beam and his brother James - seventh generation descendants of Jacob Beam who sold his first barrels of corn whisky ‘Old Jake Beam’ back in 1795. The distilling world is a close-knit community, so it turns out that they are also fourth-generation descendants of JW Dant, who produced the original Yellowstone whiskey in 1872 – a brand they would refashion and reinvent nearly 150 years later. Limestone Branch Distillery is located in Lebanon, Kentucky, about half an hour South East of Bardstown – within a stone’s throw of the original site from the family’s past. Construction was swift and in a little over 6 months, the first spirit was running from the stills. 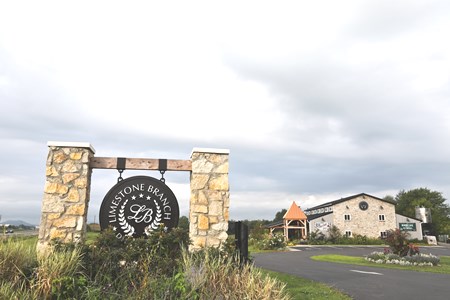 Fast-forward to 2018 and Limestone Branch is now rolling out two of its main products - Yellowstone Select Bourbon and Minor Case Rye Whiskey (which The Dramble will be reviewing shortly) into the UK.  We caught up with Beam at the Whisky Show and had the pleasure of spending some time learning about his background, the construction of Limestone, and his wider thoughts on the future of American whiskey.


When did you join the world of whisky and what were you doing before?

I grew up around this business, but not working in the business. My grandparents lived in an area of Kentucky rich in distilling history, so when I visited them, I would soak-up as much as possible. I had an early interest in horticulture, and earned a degree in Landscape Architecture, which was my first career for about 20 years. As my parents grew older, I felt the need to return to my roots in Kentucky. My brother had been in the restaurant business, so I joined him and it became a second career. However, I had always been interested in returning our family back to the business of distilling. We would have been the first in seven generations, since 1795, not to have been involved in the distilling business. That was just too much bad karma. I also thought that our family’s story had not been fully written. In 2010, I began the process of opening the distillery and in December 2011, the first drops of our whiskey came off the still.


Could you tell us about your role as Master Distiller with Limestone Branch?

I’m actually the head distiller at Limestone Branch - my Grandfather was a Master Distiller and he had 50 years in the business, so out of respect to him, I have a little way to go before I claim the Master title. As head distiller, I set the profile of our whiskeys. This includes setting the parameters for fermentation, distillation, aging and blending. We use our family’s recipes, meaning yeast and techniques, and many of the basics, are already set. I have the ability to choose the variety of corn we use, an heirloom white variety, as well as the depth of the heart cut, the standards for our barrels, and many of the other idiosyncrasies that were done from memory and not written down by our family. We have a great group of distillers who work under my direction to make everything happen on a day-to-day basis. 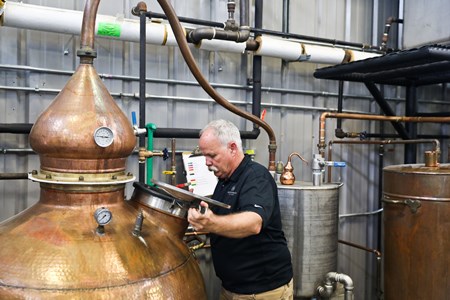 What does a ‘normal’ day look like at Limestone Branch – and what is your favourite aspect of your job?

I usually begin with a walk around the property with the dogs, Bosley and Char. We really have a beautiful site and I enjoy this ritual. Then I come through and check on our fermentations. I check them by taste and smell to see if anything seems off. I’ll check the data. I will taste what is coming off the still and head up to the office to go over our production numbers. We have a lot of visitors, so I try to stop and talk with them as much as possible. I try not to do any serious tasting or blending until early afternoon, this will vary depending on what project we are working on at that moment.


Could you tell us about the equipment and facilities that you'd build/installed at Limestone?

We are a very simple pot still operation. We begin with a 550 gallon mash cooker and six 600 gallon stainless steel open top fermenters, one 600 gallon stripping still and a 150 gallon alembic pot still. We double distil everything we make. We also have a milling operation and are just upgrading our boiler and chiller. We have a repurposed shipping container for our 15 gallon experimental barrels. 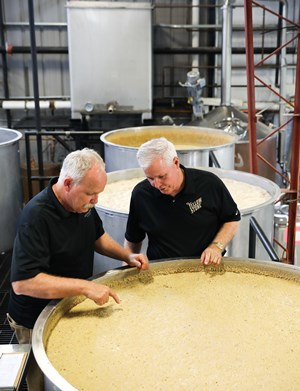 Is there anything you'd love to add?

Yes, next up is a barrel house to house some of our 53 gallon barrels.

I have always loved working with plants, I worked with the Miami Beach Botanical Garden and that was pretty special. I presume I would be in a greenhouse somewhere. 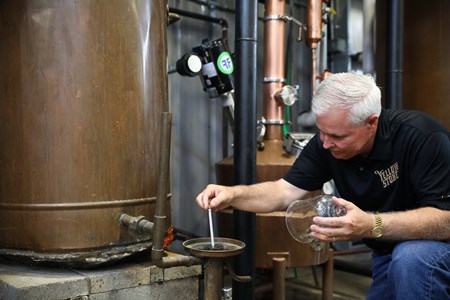 Could you summarise what you see as Limestone Branch's house-style?

We are very traditional - our focus will always be Bourbon and Rye. I love to experiment, so I respect the tradition, but add my twist. Our Minor Case Sherry Cask Finished Rye is certainly a different take on Rye. I am experimenting with different toasting levels of grain. In essence, we will always adhere to the rules for Bourbon and Rye, but push them to their edges.


What can we expect from the distillery in the future?

As I mentioned earlier, we are a Bourbon and Rye-focused distillery. These whiskeys may come in and out of fashion, but that is what we will always make. I have some barrels of our standard bourbon - 75% white corn, 13% rye and 12% caramel malt - that I laid down, which will be the first of the experimental bourbons out of a 53 gallon barrel. We will be having a wheated bourbon come out around 2023. It is a historic recipe and at 28% wheat, it will be, as far as I know, the highest percentage wheated bourbon out there. My love of horticulture does have me playing with gin, but it will probably never make it off the distillery property. 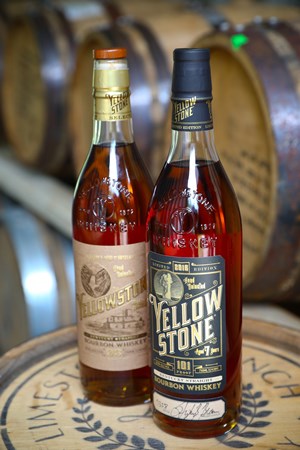 For the future for American whiskey, I don't think it has been this exciting since before prohibition. With all the new small distilleries opening up, there is going to be a plethora of tastes and expressions out there. I am very excited to see what is coming down the pike, especially as the smaller distilleries gain age and experience. Just think, a little more than 10 years ago, a half dozen or so made 95% of all American whiskey. While there were hundreds of brands, there were many fewer flavour profiles. What is coming is very exciting. I also think we are going to see many more "small batch" whiskeys, special bottlings and one-off's that once they are gone, they are gone. Store picks have really gained in popularity. American single malts are becoming a category. I think as far as American distilleries, you will see the regional influences really shine, at least I hope so anyway.


There's been an explosion of interest in bourbon and rye over the last few years - what do you put this increase down to?

A couple things helped prime this movement. I think the interest in authentic crafted products, which all bourbon and rye whiskeys inherently are, due to the nuances in grain, stills, climate, and wood. Great whiskey can't be rushed and I think in this busy world we live in, people respect that. The craft beer scene certainly provided a segway. Of course, there is also the cocktail culture that utilises these spirits as well.

If I could have any bottle of whiskey, I would love one that my grandfather made, but those have been drank long ago. So, it’d have to be a modern whiskey, meaning no doubt about it, it has to be the 2015 Yellowstone Limited Edition. It is robust and deep, and I believe an exceptional bourbon. At 105 proof, it provides opportunity to be utilised in so many ways. It is also the first whiskey that I blended, so there is that sentimental part for me as well. 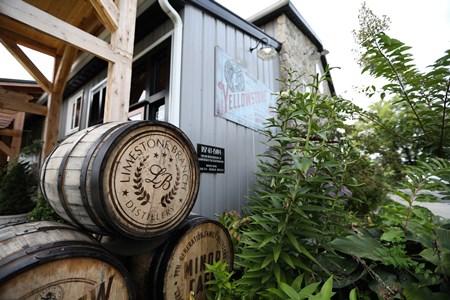 With thanks to Steve Beam and Chapman Poole Communications.