In March, Gemma Paterson was named as the new Balvenie Global Brand Ambassador. Originally from the Scottish Highlands, Gemma might not have been born into whisky, but over the past four years she has completely embraced it, obtaining her General Certificate in Distilling, and studying for the three year Institute of Brewing and Distilling Diploma – all the while representing the Balvenie brand and its range of single malt whiskies. Dedication, commitment and passion all come naturally to Gemma.

For the past two years she has represented Balvenie as their US East Coast Ambassador. Now in her new role as Global Brand Ambassador she takes on a worldwide remit for the brand (taking over Sam Simmons, who has moved to become Head of Whisky for Atom Brands), and starts the next phase of her whisky journey. We spent some time talking to Gemma about her background, new role, and thoughts on the wider industry and current trends.

Four and a half years ago I started as a guide at the Glenfiddich distillery and I guess that’s when I officially joined the world of whisky. Prior to this I studied Russian at Glasgow University and spent a bit of time travelling. I studied and worked in Moscow and the Czech Republic. Moving to Speyside and starting at the distillery allowed me to combine my love of languages with a newfound and growing passion for whisky and I’ve never truly left!


How is your role going to change now you've moved from a US-centric role to one that has global reach?

For Balvenie we have a strong team of eleven ambassadors across the world. I’ll be travelling more to provide support to places where we do not have an ambassador, often supporting our Malt Master, David C. Stewart MBE, when he travels, helping to launch new variants, etc. I’ll be working more closely with the global marketing team, mentoring the wider ambassador team and hosting trips to Dufftown. I’m looking forward to spending more time at the distillery again as it is where my love for whisky began and where I really feel at home.

You speak of Sam Simmons (previous Balvenie Global Ambassador) as having been a mentor to you throughout your career - what did you learn from him that will help you in your new role?

Sam achieved a great deal throughout his career with Balvenie and was an incredible mentor to the entire ambassador team. He played a key role in hiring almost each and every one of us. As a team we shared a number of trips together, spending time at the distillery, travelling to Japan, Spain, France, Islay, America and Canada to visit distilleries and expand our knowledge…he not only enriched our knowledge of Balvenie but of the entire whisky category, encouraging us to become experts in our field. Most importantly however he taught us to always take our whisky seriously but to never take ourselves too seriously. We will greatly miss Sam leading the team however it is reassuring that the whisky world is a small one and we will always remain friends.

Where do you see your whisky adventure (and career) taking you in the future?

Whisky stole my heart four years ago and its been the greatest journey ever since. I’ve immersed myself in as much as I can, visiting distilleries, spending time with our craftsmen, working in the maltings with the team, mashing, distilling, hanging out with our scientists in the lab, our Malt Master, sitting my GCD and joining the nosing panel at the distillery…I still have a lot to learn about various aspects of the business but the thing I enjoy most about my current role is meeting people across the world who are passionate about whisky and the opportunity to take what I have learned to them. Nothing beats bringing the distillery to people who can perhaps only dream of visiting us. I’m passionate about sharing stories and knowledge…it is a field that I would certainly like to stay in and facilitate looking into the future.


Who in the whisky world do you find the most inspiring and why?

I remember so well the day I first met our Malt Master, David C. Stewart MBE. I was so star struck and he is for sure the most inspiring person in the industry to me. This year marks his 56th year with William Grant and Sons and I am constantly bowled over when I think about everything that he has achieved. The experience and knowledge he has gained over these last 5 decades is immense, I learn something new every time we are together. David played a monumental role in both the blended whisky category and the emergence of single malt. He has received countless awards and international recognition and has been awarded an MBE from the Queen for his services to the whisky industry and yet he remains incredibly humble and modest. This I find most inspiring.

Which expressions from across the Balvenie range do you personally enjoy the most and why?

I love the journey Balvenie can take you on when you explore the range...from the finishes through the core range with DoubleWood, Caribbean Cask and PortWood, the Single Barrels and the ability to explore an endless number of single cask bottlings to the rich complexity of the Tun 1509 releases. When I very first received the news that I was going to be moving to New York City from Speyside to represent Balvenie Stateside in March 2016 (right on Paddy’s Day, I’ll never forget it!) I cracked open my bottle of Batch 1 Tun 1509 which I had been saving. Any time I’ve been lucky enough to sample this whisky since it instantly transports me back to that moment…


Whisky is still all too often been portrayed as a masculine drink, and recent women-focused marketing campaigns (Jane Walker / Brew Dog Pink etc) have continued to cause controversy with their approach to whisky and gender. How do you think that brands should ensure a more balanced approach going forward?

Whisky is enjoyed by a diverse group of people across the world. Women have been involved in the making of whisky for centuries. For example when William Grant first founded our distilleries his daughters were integral in helping him achieve his dream. William Grant’s granddaughter, Janet Sheed Roberts was one of the most influential people in the history of our distilleries and women have been involved in shaping the history of a number of distilleries, i.e. Cardhu, Laphroaig and more. I think brands can ensure a gender balanced approach by celebrating all the men and women who have shaped the category and who continue to do so.


Are women represented enough in the whisky world today? what more could be done to change some of the long-standing misconceptions around whisky and gender?

Women are well represented in the whisky world, we have many women involved in the production of our whisky across various departments…from our distillery manager, Mhairi MacDonald leading the helm in the making of it to myself out there talking about it! Campaigns like #OurWhisky highlight that whisky is in fact enjoyed by everyone, the drink doesn’t discriminate perhaps just our perceptions of it. And those perceptions are shifting I feel. What more can be done? Remaining open minded and embracing everyone who enjoys a dram. No barriers to entry, except the legal drinking age obviously!

What new trends might we see in whisky in the future?

Last year in the UK sales at auction rose by 76% in comparison to the year before, the trading of rare and precious bottles is one that is not slowing down so I believe we will all have fun keeping our eye on the auctions this year.  The use of single malt scotch in cocktails, experimentation and innovation in the category are all trends which we can expect to see in the future.


What can you tell us about Balvenie looking later into 2018 and beyond - anything new on the horizon that enthusiasts should keep an eye out for?

We have a few special and exciting things ahead of us. This year marks the 25th Anniversary of DoubleWood 12 year old, which was first launched by David in 1993. Expect some celebrations around this! David and the distillery team are also constantly innovating and we certainly have some interesting stock which has been laid down over the years as well. Watch this space. I can say no more!

Where have you travelled with your role, and what has been your favourite destination so far?

The last couple of years I have been fortunate to travel across a number of States in the US (28 and counting..!) and multiple cities. It’s been incredible, I’ve particularly enjoyed the time I’ve spent here and the people I’ve met in the likes of Boston, Washington DC and New York City. My travel is only just beginning with the new global role but I expect to spend a lot more time in Asia which will be exciting. Our trip as an ambassador team to Japan was absolutely incredible and it seriously was a dream come true to visit distilleries there. So I guess I would say Japan has been my favourite destination so far! 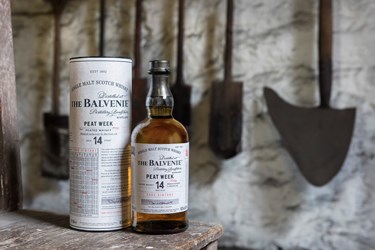 I hate the thought of only having one bottle of whisky to sip on but the answer is so easy! The DoubleWood 12 year old would be my first and last choice. It is the first single malt whisky that I ever sipped and loved and one which I’m always delighted to go back to!

With thanks to Gemma Paterson and Balvenie.