I’m probably far from alone when I say that I spend too much of my personal time trawling the Internet for news of new and shiny releases that are going to be winging their way into the marketplace. Indeed, in the current whisky world, if a release is from one of more widely known distilleries, or is in anyway limited, you’re probably going to need to move fast to even have a chance of obtaining it. Sometimes you need to employ a bit of personal detective work - keeping an eye on news sites, talking to colleagues who may have overheard a morsel of information, or indeed catching up with brand reps who accidentally on purpose give you a bit of a head start. With each year there are more and more releases - too many to possibly keep track of, but here are few upcoming bottles that The Dramble is going to be keeping a close eye on.

Most of you will already know about this one. News slipped out last Autumn of this impending Ardbeg Day release with the uploading of the bottle logo onto the US TTB (Alcohol and Tobacco Tax and Trade Bureau) website. At the time, there were many who thought that the label and logo was a deliberate fake – a marketing move designed to keep people off the scent of the real theme and bottle for the Ardbeg Day celebrations. Turns out not.

Ardbeg Day has become less and less about the whisky and the distillery itself, and more about whacky and off the wall promotion. Whilst inarguably fun and creative, I’m beginning to feel that these celebration releases are starting to stretch a touch thin. Ardbeg Day itself will be held at the distillery on Saturday 2nd June (during the annual Feis Ile festival), however Ardbeg Committee members (I.E. you're on the mailing list) have the opportunity to purchase a higher strength ‘committee’ version of the bottling from next Wednesday morning. If you’re in anyway interested in obtaining this, you’ll need to move quickly – Committee releases don’t sit around very long at all. 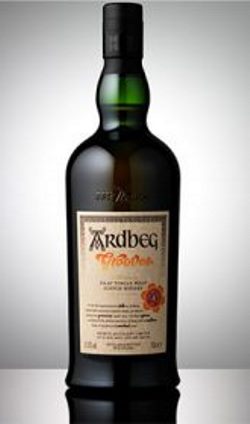 The 2018 ‘Grooves’ release in somewhat unique, and somewhat reminiscent of a previous bottling. The whisky has been matured in ex-red wine casks – which I believe might be a first for Ardbeg. These casks have been heavily charred inside, a process which has led to the formation of ‘grooves’ across the surface of the burnt wood – this to me doesn’t feel unique – those of you who have been around since 2011 will remember Ardbeg Alligator. This too was named after the pattern left in the wood following a process of charring. I’m starting to wonder how many new names the Ardbeg marketing team can come up for what is essentially the same thing.

Nevertheless, we’re always excited by new Ardbeg releases, whilst the marketing often leads with the whisky following, the whisky itself always of high quality. If Grooves turns out to be as tasty as last year’s Kelpie, we’ll be happy enough. So, we’ll be joining you all in trying to get a bottle of this next week, and then hopefully bringing you our tasting notes shortly after.

I’m a self-confessed Bunnahabhain fan boy – it’s very much my style of whisky, so any new releases from the distillery always pique my interest. Just recently, we’ve had Toiteach a Dha (basically a 2nd release of 2007’s quite peaty Bunna), and shortly, we’re going to be getting a new travel retail expression in the form of Bunnahabhain An Cladach. But, wait a minute, wasn’t An Cladach announced quite some time ago? Well, yes, something has gone oddly awry with the marketing release plan for this one, as the initial announcement for this bottling came last August, a full eight months before the release will actually hits the shelves.

Surely, that’s not a deliberate tactic (if it is, its a mighty odd one) and there’s been production delays or similar, so I’m hoping the Bunnahabhain marketing guys will not sit back with this release already ticked off their to-do list. But, still, nothing has been publically announced yet beyond the initial news story last August. However, talking to one of the reps at the start of this year, he very helpfully did some digging for me, and let me know that the new travel bottling will be launched first in Frankfurt Duty Free (indeed, it’s slipped out there already with barely a word) and then will be available wider within travel retail from next month. 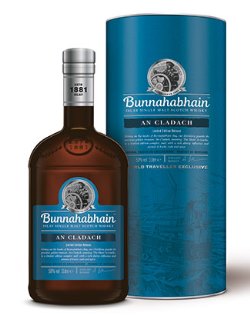 There’s not too much to say about the actual whisky in An Cladach as yet (though a timely business trip over to the US means I should be able to nab a bottle on my travels to bring you all some notes next month). It’s described as a sherried whisky, which is no great surprise for Bunnahabhain, but, then the initial release text goes into 100% bullshit mode with the indication that the bottling is about ‘conveying the story of a fishing boat navigating the rough seas on its way to Bunnahabhain Bay’. Urgh. Please give it up guys, this type of marketing is exceedingly last decade. Anyhow, I’m still excited for this release for two releases – firstly, the bottling comes in at 50% ABV – that’s a touch unusual, as for a number of years, all Bunnahabhain bottles, whether core range or travel retail have all been bottled at 46.3%. It’ll be interesting to try to assess what this move to a higher strength brings with it - more mouthfeel, better top end flavour notes? Likewise, I am wondering how this bottling will compare to the two other Bunna travel retail offerings presently available. The peated ‘Cruach Mhona’ is a solid drop in my book, but the red wine influenced ‘Eirigh Na Greine’ doesn’t quite tick the same boxes for me, being exceedingly youthful. Time will tell, but we’re hopefully that this new travel retail Bunnahabhain will deliver the goods.

Speyburn are really starting to push their newly rebranded single malts, and that pleases me. Whilst it’s never been a distillery that’s been at the top of my attention, it’s one with a dedicated fan base (particularly in the US I believe) and several new releases to be shouting about. I’ve not written any tasting notes as yet, but the recently remodelled 15 year old Speyburn that I tried last year certainly felt like a solid core range offering. Now, the distillery is trying to spread its wings further with two new travel retail expressions coming soon. 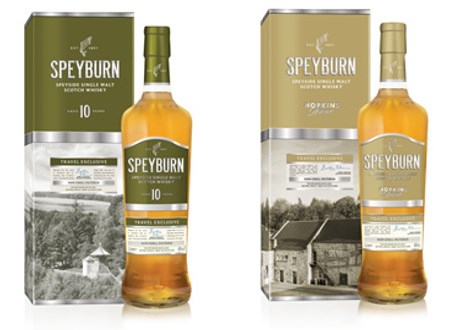 The 10 year old non-chill filtered is described as a limited edition bottling. As far as I can tell, its DNA is the same as the existing 10 year old, but with a higher ABV of 'golden strength' 46%. I’m looking forward to seeing how this increase in alcohol not only adds some weight to the 10 year old’s mouthfeel, but also helps with the delivery of the fruitier top notes of the whisky. It’s looking like costing a whole £10 more for the bottle (£40 as opposed to closer to £30 for the existing 10 year old) but, nevertheless, this is still on my try list when passing through travel retail in the future.

At the same time as the limited edition 10 year old, comes the Speyburn Hopkins Reserve, also an airport-only bottling, but with quite a significant difference for this distillery – Hopkins Reserve is lightly smoky, having been matured in casks which have previously held peated whisky. Like the 10 year old, it’s also bottled at 46% ABV, but, has a very reasonable looking RRP of 35 Euros. I’m intrigued to try Speyburn in a slightly smoky style, and am hoping that it actually works with, rather than against the distillery character. Time will tell, but I’ll but sure to let you know my thoughts on it in time.