It's maturation Jim, just not as we know it 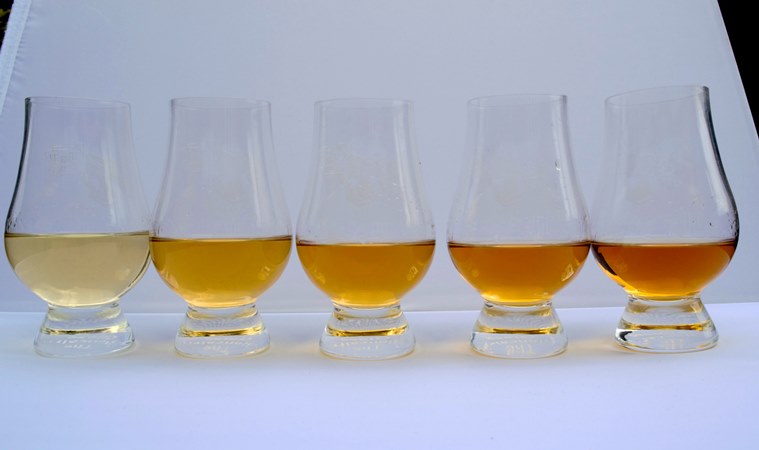 The conversion of raw distilled spirit into whisky is a slow, transformative interaction between physics, chemistry, biology and geometry. Almost as varied and multifaceted is the countless types of casks from which a Master Distiller can select for maturation – the wood elements ageing the liquid and adding layers of complex flavours, aromas, colours and textures over time. The process is part science and part art, requiring skills learned over decades and passed down to future generations of distillers and blenders alike. Alternatively, sod that for a game of soldiers. Let’s have a go at doing it ourselves.

Before we delve into home barrel ageing and present you with the results of our 8 month experiment, let’s get two things out of the way. 1) I am by no stretch of the imagination any type of expert in ageing and finishing spirits – you’ll find much more experience and knowledge on the Internet, including via the ever helpful guys on the Hacking Whiskey Facebook group. 2) When undertaking home barrel maturation, set your ambitions high, but your expectations low – particularly if you’re looking to add a finish to an already complete product. You’ll certainly be creating something unique, adding new flavours and hopefully having fun along the way – but you’ll not achieve decades worth of quality maturation in the space of weeks, nor will you be producing the next great masterpiece.

There’s a lot of DIY barrel kits available on the market and some are better than others – do your research. These barrels tend to be quite small – 1 or 2 litres and often come with proprietary new make spirit/white dog to fill. I’ve so far been a little wary of these – tales of excessive leakage aside, the small size of these means that maturation is going to be exceptionally rapid (very high liquid to wood surface ratio). Your new make is going to take on an incredible amount of flavour extremely quickly, but it’s likely to be raw as a chafed arse after a 100km uphill bike ride. Newly bought smaller home barrels will commonly be American virgin oak - some will come ready toasted/charred – which to my mind is a good thing, as whilst home maturation might be a thing, home coppering is likely to require skills that no one reading this article possesses. If you get a chance to see a selection of barrels before purchasing, do consider checking out the grain of the wood – tighter grains mean denser wood, and this usually equates to being able to produce more ‘batches’ before the barrel becomes exhausted.

The purpose of my barrel experiment was to finish whisky rather than mature new malt, so I acquired a 5L barrel/keg from Celtic Timber without any additional spirit. I did however have my bar’s logo engraved on the head – it’s the little touches. There’s a wide range of casks available from Celtic Timber, including more unusual wood types (Acacia and Chestnut) as well was several ex casks which have held predecessor liquids. These guys have something for all budgets and all levels of experience. 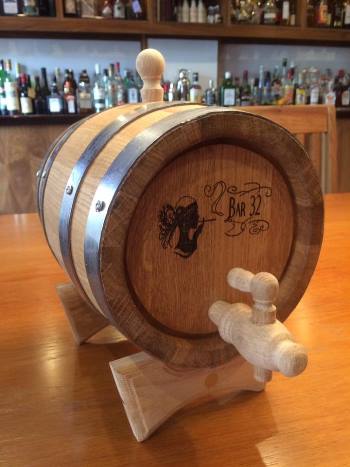 Once you’re the proud owner of a new barrel, you’re going to need a wee bit of patience before you start pouring spirit into it – first of all, the wood needs to be sealed and cured. I started by rinsing the barrel out with water, which removed a fair amount of wood debris and loose char until the water ran completely clear. I then proceeded to completely fill the barrel again – this time with hot water. I left this for 48 hours to allow the wood to absorb the water and expand into the hoops, thus ensuring a good seal across all the joined section of the staves and heads. One I was sure that this process had been successful (I.E. there was no leakage), I removed the bung and emptied the (now very murky and filled with splinters) water away and left the barrel inverted to allow it to dry out just a touch.

Whilst you could go right ahead and add spirit at this point in the process, virgin American white oak (particularly in a tiny little barrel with large surface contact) is going to impart a serious amount of fresh oak flavour. Seeing as how I’m growing increasingly tired of countless new whisky expressions where the dominant flavour is vanilla (and also that I was planning to finish some existing whisky, not new make), I decided to reduce the wood impact (and tannins). If you can get hold of Everclear, I believe this, with its very high ABV would be ideal for this stage of the process. Less easy to find in the UK, I opted for cheap, but high strength supermarket vodka – the key being that a neutral grain spirit will strip the wood enough, without imparting additional (unwanted) flavour. 5 litres of vodka and 4 weeks later I was left with this:

The liquid has clearly taken on a ton of colour from the wood, and if you’re looking to make some barrel-aged vodka, congrats, job done. It is however, in the end, still just cheap vodka – only now tasting like someone has beaten it to death with a vanilla pod. It’s not something I’d personally recommend as a relaxing drink of choice, but your mileage might vary.

It’s now time to fill your barrel with something that you’re hoping to extract proper flavour from. In many ways, the world’s your oyster here – I’ve even read tales of Vimto finishes (funky, but not good for your cask!). For this experiment I opted for something fairly straightforward and innocuous – Amontillado sherry. I chose Amontillado over other sherry varieties for several reasons. Firstly, it’s a lot less sugary and viscous than PX – which I sometimes find can be heavy handed – and with such a small home barrel would almost certainly overpower the whisky I was looking to mature in a very short space of time. Secondly, Amontillado is darker and richer than Fino. Whilst both are flor aged, which offers nuttiness and tobacco (both of which I thought would be interesting flavours to play around with), Amontillado is usually higher strength and often comes with just a touch more sugar than its super dry Fino cousin.

I filled the barrel with 5 litres of Amontillado and left it for 6 months. Yep, patience is required at this stage too I’m afraid. After the time has elapsed I removed the sherry via the tap, and decanted it (more on its final destination shortly). Finally, I inverted the barrel over a large bowl to ensure that I wasn’t leaving a large volume of sherry still in the barrel for the next stage – remembering I’m looking to home finish some whisky, not blend sherry directly into it.

In deciding which whisky I was going to select to experiment on I considered several factors:

1) Cost – guys, there’s no point bulk buying bottles of 20+ year old liquid and hoping to improve them with your home barrel – it’s not going to happen and it's exceptionally wasteful. Likewise, whilst it’s entirely possible that home barrelling could indeed improve your Dad’s stash of Bells, with an ABV of 40%, it’s quite probable that by the time you’re finished, your resultant aberration will have dropped below the magic 40% and into the realm that many might consider to be ‘not whisky’ (except the Japanese, pretty much anything is OK legally for those guys currently).

2) Initial flavour profile – I deemed that buying bottles of sherry matured whisky and then adding my own sherry finish to them would be, whilst not pointless, at the very least repetitious. My objective was to add new flavours, not to fortify existing ones.

After careful consideration I opted for Glen Moray 12 year old produced by Douglas Laing for their Provenance series. Straight-forward, ex-bourbon matured, and relatively inexpensive. Botted at 46% ABV I decided that this was high enough that post maturation I’d still be over 40%. Likewise, the MoM tasting notes implied some pleasant, but basic ex-bourbon-led flavours on which I could attempt to build on. Bottles purchased and emptied into the barrel, the experiment was now underway.

As you’ll see from the photo at the top of this article (where’s someone skilled in the art of whisky photography like John when you need them?!), the colour change from the original spirit (left) through four weeks of home barrel maturation is marked. Our original unadulterated Glen Moray starts with a pale straw colour which quickly deepens to gold and copper and ends, after four weeks in a tawny/auburn hue.

Let’s take a quick look at how the aroma and flavour profiles have changed over the entire process:

-Original: On the nose - malts and hay with honey, pear drops and gentle grassiness. On the palate – sugary pears, vanilla, malty biscuits and some obvious youth.

-Week 1: There’s some slight nuttiness and berry fruit on the nose now – these have replaced the pear drops we could detect in the original sample. Gentle toffee is starting to creep in. Overall, still very light and with a grassy outlook. In the mouth, immediately much more drying, red berries join the pears (which are still perceptible). There’s also some tinges of milk chocolate starting to appear. Youthfulness is still apparent, but the additional flavours mask it somewhat - a practical home lesson in why some producers decide to finish young whisky.

-Week 2: Now there’s immediate sherry on the nose – strong berry fruit influence, but fresh and lively. Vanilla has all but disappeared, maltiness is reduced and replaced by increasing volumes of nuttiness and chocolate. In the mouth, the start of a more syrupy texture – though dryness is increasingly becoming a real issue. Berries led, nuts follow and now wisps of golden tobacco can be detected.

-Week 3: Interestingly dusty – not quite leathery, but heading in that direction. A mixture of sweet red fruit and darker chocolate covered biscuits. The sherry influence appears more settled than it did on week 2. Increased viscosity, now with stewed rather than fresh fruits. Still very dry, and with the original cask influence starting to re-exert itself – vanilla is back and is joined by some gentle peppery spicing.

-Week 4: Rich, boldly sherried and with toffee and fudge starting to develop. The dusty/leathery aroma remains, but is subdued by the level of sweetness that now pervades the entire nose. In the mouth - candied and sugar coated fruits and berries, chocolate, toffee and fudge and some pretty huge vanilla in the mid to back palate – quite astringent and quite drying still.

If I could take my pick of the resultant liquids I’d probably choose week 2 as the most enjoyable, but in all honesty, if I was reviewing and scoring these properly, every single one would score lower than the original unaltered Glen Moray (in no real surprise to anyone) - adding flavour using a home barrel is straight-forward, whilst balance and nuance are a lot less so. This all said, home barrel ageing is still an extremely fun undertaking - it’s fascinating to see how a predecessor liquid can add a lot of flavour in a short amount of time. It’s arguably even more interesting to experience the oak re-exerting itself a few weeks into the process. Some of you might be interested in the overall Angels' share I experienced - whilst there was extraction each week (and therefore this will have an effect), overall I lost around 1/6 of the original Glen Moray after the four weeks of finishing.

Oh, yes, the leftover sherry? Once you’ve finished maturing/finishing your whisky you don’t want to leave your barrel to dry out – least of all you might end up with bacterial growth. You could get some more whisky and start playing around once again, you could fill it with water to maintain the seal and help prevent the development of microbials. I chose to throw the Amontillado sherry back in – it’s already been barrel aged – let’s see what an additional long ex-whisky finish might do to it next.