It's quite the honour to be selected to join the Arran annual tasting panel to decide on the whisky which will become the 2017 White Stag bottling. As part of the panel, I joined a 20 strong group who were all sent a tasting pack containing three different whiskies. But, unlike most tasting packs, no hints at all were given as to the contents of the bottles. They were just labelled as Samples 1, 2 & 3. Decisions, decisions!

Isle of Arran Distillers 'White Stag Community' is so named after the legend of the White Stag, a spectral creature which has allegedly been sighted on a number of occasions on the hills of Lochranza. Potterheads will likewise know of the myth through Harry Potter's stag shaped Patronus charm. "Expecto Patronus" is rather fitting for the White Stag Community – from the Latin it broadly translates as 'I await a guardian' and in many ways Arran’s White Stags are its guardians – dedicated enthusiasts who champion the brand and share their passion for it with others.

The role of being a White Stag Tasting Panel member is simple enough - pick the whisky from the three samples provided to become the next White Stag bottling. The actual process of doing this however is much more involved, and no doubt looks very different across all of the 20 panellists. I can therefore only outline how I approached this task! 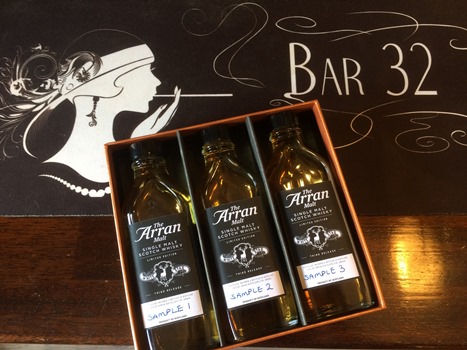 Panellists were asked to provide detailed tasting notes covering the nose, taste and finish of each whisky. I treated each in turn, nosing, then tasting and making notes the entire time. I then got handy with my pipette and (believing the samples to be cask strength), explored how the addition of water altered the characteristic of each sample. Having made my initial notes I took a 24 hour break, then came back and conducted the whole tasting experience again.

My notes, combined together from each of my two tasting sessions, are shown below. Following the conclusion of the tasting panel, cask details were provided to all panellists - for completeness these are included for each sample, but remember, at the time no information was provided to ensure an unbiased open-minded selection was made! 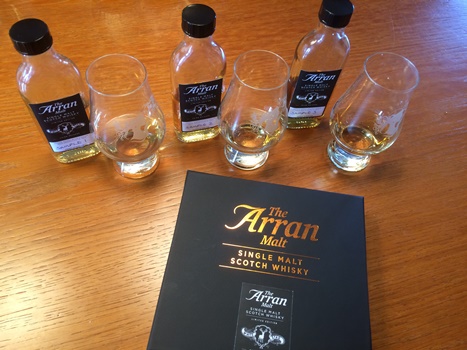 Nose:  Pronounced, rich and confidently expressing its age. immediate honeycomb with hints of ripe pineapple and a smattering of orange peel (an excellent dessert combination right there!) Deeper aromas which imply a degree of age to the whisky - light polish and leather. A background gentle char mixes with some doughy notes.

Taste: The mouthfeel is expansive. Wood chippings, barley and tanned leathers with white pepper and a lovely level of salinity. A few drops of water really brings out the fruity notes.

Nose: Initially restrained, but it’s an assassin hiding in wait - give it a little time in the glass to relax. Bright vanilla, with dense chocolate and damp coffee grounds. Fruit is tropical favouring pineapple, perhaps with a dash of mint. Water really makes this zing - sherbet!

Taste: Woods forward and dusty - like a tobacco filled wood-panelled office. Again tropical notes, but more banana now...a rather plastic like banana that you'd find in kiddies sweets. The mouthfeel is full and there's a fair alcoholic bite to this. The addition of water brings out more fruit and again that lovely sherbet zing.

Finish: Medium-long with oak spicing (pepper) and a punchy salty bite. But the oaking makes for an incredibly tannic affair - I'm finding it pretty bitter.

Nose: Pronounced, expressive and balanced. Warm sweet malts take a wander through the countryside picking up hay and grassy notes. Sweetness is balanced by both a salty tang and an intriguing flinty/mineral note.

Taste: Full and mouth coating. Malts, barley and hay imply we're in the countryside again, but deep woody and vegetal flavours want to pull us deep into the forest. Lovely polish, leather and burnt tobacco notes emphasise the age of this whisky, whilst fantastic salinity provides a lively salt tang. A real journey which requires as much thinking as it does drinking.

Finish: Medium-long in length and with a drying astringency. Not overbearing, and tempered by a peppery richness. 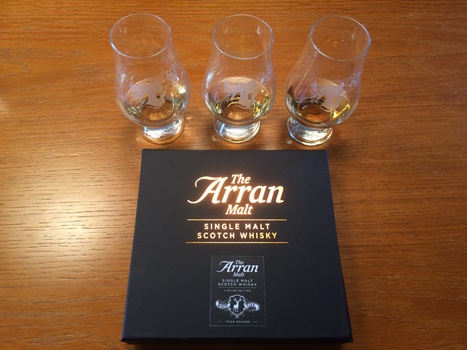 Sample 1: This sample oozed with quality, offering up a wonderful melting pot of fruit notes, sympathetic spicing and superior aged flavours. It was the sample which, to my palate, tasted the most like recent mature sherry cask Arran bottlings that I have sampled.


Sample 2: I gave more thought to this whisky than either of the other two. I found it complex and challenging and the sample which altered the most when water was added. However, my palate found the wood influence, and therefore level of bitterness, in the finish to be extremely high. Whilst sometimes a desirable characteristic – who doesn’t like a bit of lip-smacking dryness on occasion? – if you juxtaposition this against the very sweet, sherberty notes which come out even further with the addition of water, in this instance I found the astringency to be rather jarring in terms of overall balance.

Sample 3: To my taste, the most interesting of the samples. Unusual earthy and vegetal notes which I haven’t to date largely associated with most Arran bottlings. A tang of salinity connects so completely to the deeper aged notes of polish and tobacco, creating a whisky which has some serious fresh vibrancy and yet at the same time, aspects of austere age – a wonderful contradiction in a glass.

Received 8 panel votes, including my own.

The selected casks – Sample 3: 96/622 and 96/652 – will therefore be the ones married to create the 2017 White Stag release. The other three casks will end up back in the Arran stocks – perhaps for bottling as single casks, or perhaps for a distillery exclusive in the future. I’ll be keeping my eyes peeled for the cask numbers that’s for sure! The White Stag casks will however continue to age whilst they sit and wait for the bottling to be released, which should be around mid-September this year. At that point they will be 21 years old and (unless something else is released in the next three months) the oldest official release from Arran. Given the marriage of two casks, expect a release of around 650 bottles, which is similar to the previous outturn last year. If you’re interested in obtaining a bottle….with my name on the packaging (so who wouldn’t want one of those right?!), sign up to join the White Stag Community and await news in a few months’ time.

With thanks to Isle of Arran Distillers for selecting me for the 2017 Tasting Panel.